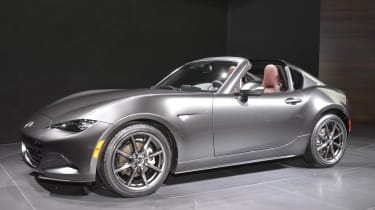 A Mazda MX-5 RF launch edition will also be available. It will be a limited run, 500 car special with BBS wheels, alcantara trim and recaro seats. This will cost £28,995.

The MX-5 RF boasts a 911 Targa-style roof that sees the MX-5 retain its rear pillars and window, it gives the fourth-generation car a completely different ethos to its predecessor.

If you'd like to see how the RF's new roof works, then the Mazda channel has a video showing the mechanism operating in full.

The entire middle section of the RF's roof can be stowed in the MX-5's boot, with a fully automatated electric system carrying out the process in full - a first for the MX-5.

Luggage space matches the standard MX-5 at 130 litres, while the entire system itself can be operated at a maximum speed of 6mph. The folding and stowing process takes around 12 seconds. It's also possible to lower just the rear glass of RF but keep the roof in place. 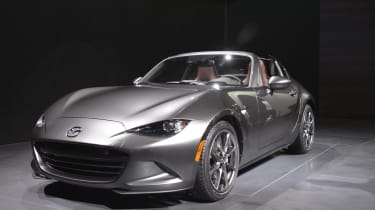 The announcement of the RF also brings with it the option of a six-speed automatic gearbox (exclusive to the RF), as well as the standard six-speed manual found in the soft-top car. Engine choice remains unchanged, with both 1.5-litre and 2.0-litre petrol motors available.

Expect the roof mechanism found in the RF to bring a weight penalty to the MX-5, although official figures are still to be confirmed. Speaking to MX-5 programme chief Nobuhiro Yamamoto at the New York show, he revealed that the difference between soft and hard tops would be slightly greater than it was with the third-generation car (around 40kg).

The RF receives a number of setup tweaks designed to make the car into a softer and more comfortable cruiser. Cabin noise has been reduced via added sound deadening in the rear wheel wells and headliner, while the power steering and suspension has been retuned specifically for the RF. 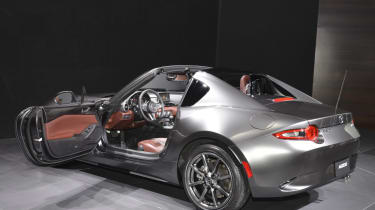 Yamamoto also hints that the RF will be slightly stiffer than its full convertible counterpart. While no additional bracing has been used on the car, the flying buttress roof arrangement should be inherently stiffer than the open top of the standard car.

Also unique to the RF is a 'machine grey' paint scheme that uses three seperate coats to achieve a deep, metallic effect under specific lighting conditions. The central roof panel is also available in both piano black finish or body colour.