Our mission has remained the same since the very first Mazda MX-5. From the car’s conception, it’s been about the enjoyment of driving – we want people to have fun behind the wheel. Our goal has been consistent since 1989. What we’ve changed is the technology – we’ve always tried to incorporate the latest technologies available while providing an unchanging value of driving fun.

‘It was never meant to be just a tool for moving from A to B, either – we see the MX-5 as something that creates a harmony or connection between the person who is driving it, or the person looking at it. It’s almost like a part of a family, a partner, and by someone owning this car, it enriches their lives.

‘With the fourth generation, we went back to the origins of what the MX-5 was all about. We created a vision of what the MX-5 should be, and this vision was shared among the whole team. The aim was to innovate to preserve the original car’s ethos. We adopted that as our motto.

‘A lot of people are asking whether we’ll offer a sportier version of the car. Usually the pretence behind that is that ‘sporty’ means harder suspension and no body roll. The question I’m always coming back to is, “Is that Jinba ittai?” [A Japanese term loosely translated as ‘horse and rider as one’.] Is that what we want to give our customers?’

‘For me it’s not necessarily better if you have a firmer ride. What’s important is that all the suspension is moving as it should, and it’s telling the driver what the road is doing. You know exactly how the tyres and wheels are in contact with the road, and we think that’s what makes the car fun to drive. So no, I don’t think we will have a firmer version of this car. 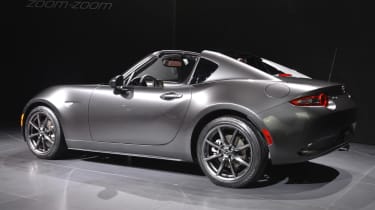 ‘The new MX-5 RF will feel slightly different to drive, though. While the open-top car is designed to have ample body rigidity, there’s naturally going to be some difference when you put a roof structure on the car. We think that gives you a different feel, different characteristics, different responses. A different taste. We’ve tried to tune the car so you get a different feeling of rigidity depending on whether you choose the soft-top car or the RF.

‘Unfortunately we’re not allowed to give you numbers on the weight yet, but I can explain it this way: If you compared the soft-top and hard-top versions of the previous car, the difference was around 40kg. The rear element on the new car is slightly bigger, but the mechanism and the other parts are very similar, so it’s only slightly heavier than before.

‘Our original thinking behind the MX-5 is that we want a wider audience to enjoy open-top driving, but if customers choose cars with a roof, like the RF, that means they are more likely to have the roof closed when they’re driving. We said, “Okay, let’s make our styling most beautiful when the roof is closed, even though they still have a car that has the potential to open – it gives them another way of enjoying the car.”

‘With the Mk3 MX-5, the soft top was the basis of the silhouette and was dictated by the shape of the cabin. It was logical to build the hard top to the same silhouette. With the RF we didn’t work with those limitations, so that’s why we’ve gone for a flowing fastback design.

‘Will there be a full coupe version? No – our aim is to produce a lightweight sports car, but the aim has always been to develop an open car. There are no plans for production versions of the Speedster or Spyder concepts, either – we think the two existing cars offer enough variety.

‘The MX-5 has a long life cycle compared to other cars. The first generation was eight years, the second generation also eight years, and ten years for the third. The fourth generation is not going to be an exception, which means there are going to be technological advances made within this life cycle. We always have to keep up with the technical advances so we can incorporate them into the car. I promise that this is something we are always thinking about, always aware of, and something I will keep doing for the future of this MX-5.’

Yamamoto-san’s words may leave some of you disappointed. While the MX-5 RF unveiled at the New York motor show earlier this year is undeniably attractive, it’s also a sign of Mazda’s self-imposed limitations. You get two engines and two body styles, but there are no plans to make the car faster, no intention to reduce the body roll evo has previously criticised, and no plans for that elusive full coupe version.

But there’s positivity, too. Mazda is absolutely committed to the concept of a simple, lightweight sports car, and that’s something to celebrate as cars offer ever more unusable levels of performance. If the Mk3 MX-5 is any indication, the Mk4 should also improve notably throughout its long life cycle – both mechanically and technologically. And the car’s success means there’ll always be a healthy aftermarket ready to tune the MX-5 to every taste. BBR-tweaked MX-5 RF, anyone? Antony Ingram