To celebrate the roadster's 20th anniversary, Mazda is holding an MX-5 race in Italy. Evo is taking part. 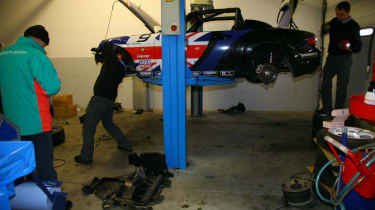 Twenty years of the MX-5. Naturally Mazda has already announced a limited edition model to celebrate the milestone (read about it here), but it's also decided to hold a special race. It's in Italy at the Adria International circuit near Venice and it's happening right now. The idea is that I'll post live blogs from the event so you can keep up with what's happening as 26 European countries go head to head.

The main event is a four-hour enduro on Thursday, with tomorrow given over to practice and qualifying. There are five drivers per car, each MX-5 is mostly standard (the engine is but we have slicks, adjustable suspension, stripped cabin, rollcage etc). It's going to be hellishly competitive and a lot of fun. There are two UK cars which is fair enough considering 50 per cent of all European MX-5's are sold in Britain, and if the picture is anything to go by, the car should be properly excellent. Stay tuned for more - provided the technology doesn't let us down.

Just bumped into the photographer from Evo Greece who claims to have caught our car's first session crash on camera. I’ll get the pics at the track tomorrow and try to post them in the next blog.

Qualifying is in the hands of Owen Mildenhall from Evo’s sister magazine Auto Express. This is good news. Prior to becoming a journalist Owen was a Formula Ford champ and lands us sixth spot on the grid. He was only beaten by other ringers – a Belgian F3000 racer, a German ‘Ring hand, that sort of thing. Trouble is our earlier troubles mean we’re automatically demoted 10 places on the grid – alongside the other UK car which has qualified 17th.

Ollie's already told you about our lack of practice after our car had the only immobilising 'off' in the entire session. Ace mechanic Jon Yates had it sufficiently straightened out for the second session, with rain really setting in now.

When it came to my laps the other drivers slithering around were used to the lack of grip from the rock-hard Marangoni road tyres that Jon has renamed 'Mahogany' because they're seemingly wooden. I, however, was really quite scared. It was worryingly like driving on snow, at racing speeds, so I pulled right to let past the Italian car that was all over my tail at the first corner.

Big mistake. I tucked in behind to discover he was Signor Sideways and was treating the throttle like a switch. Each time he ran wide I drew alongside on a tighter line, but I couldn’t get past because either he would chop in front or I couldn't get the traction to pass him on the exit. So I had to follow and content myself with two-minute laps although there was definitely a touch more speed to come provided I remained tiptoe-smooth.

On one bend, as I attempted an inside pass again, a German car sliced between us in a brilliant drift and disappeared in a cloud of spray. It was a pretty classy move, I have to say.

The rain’s coming down harder than ever. Evo’s John Simister is out at the moment, so I’m going to let him do the next update. Oh, and I’ve also posted some more pics of the cars damage.

Back in. Utterly hilarious. There is no grip at all, the wet weather tyres never seem to get any heat in them so you slide everywhere. In fact it was often faster off line, especially keeping to the outside of the banked corners (turns 2 and 5) and with 29 cars on the 1.7 mile circuit I never really got any time to myself – on one occasion we were three abreast coming on to the start-finish straight.

Some guys out there are very quick, and I had a good dice with the Turkish car who was better under brakes and on the way in to the corners, but lost three lengths out the far side. It really is a balancing act and the MX-5 is a huge amount of fun; I never noticed it understeering at all, but the back end started moving the second I got back on the throttle. It also sounds brilliant. We need this twin-pipe exhaust for the long termer.

Buzzing, but glad to bring it back safe. I’ll post some more thoughts when I’ve calmed myself down. And had a drink. Just realised I’ve got a very dry throat.

My turn. Chuffing slippery out there apparently. Time to find out. Oh and just for a giggle I’ve got my heart-rate monitor on. Will report back shortly.

Straight back in. Something’s broken at the rear and it’s got the straight-line stability of a wheelbarrow apparently. Goes up on the stands in the pit garage, but luckily it’s just a misaligned bolt. Ticehurst goes back out. My turn next

Car’s back, wishbone’s been bent back into position, colour matched duct tape. Ticehurst takes it out for an experimental lap.

Session finishes. No sign of our car yet. Going to go and get something to eat and wait for session two which starts at 13.30.

It is salvageable. Good news, but the penalty for crashing during the first practice is a ten place demotion down the starting grid. Not much to do now except watch in frustration as the other UK car – and every other bloody MX-5 – stays sunny side up. Our crasher is feeling about two inches tall…

Car 9 is back in the pitlane. Not good. Nearside’s looking decidedly second-hand, front and rear corners both been knocked around a bit, and the front NS wheel is mangled. Some deep breathing from the mechanics. One of them growls something in a language I don’t recognise. Think I’ll leave them to it.

Oh CRAP. Think our practice session might be over already. Third bloke out (I’m naming no names) has just put it in the barriers. We can’t quite see the extent of the damage from our pitlane vantage point. Have to wait until they load it on the truck and bring it back to the repair bay. Ironic really. We’d been joking about which nation would be first to dump it in the gravel... and it’s us

First practice gets underway. Mark Ticehurst, Mazda’s tame racer is out first in our car – number 9.

Speaking of the track, well by the looks of it it’s all high speed straight into second gear hairpin as far as I can tell.

Time for the driver briefing. There’s 145 drivers in here, representing 26 different countries. The briefing is only done in Italian and English. Quite how much the Ukrainians gabbling in the row behind me understand is open to doubt. Think I’ll be giving them a wide berth on the track.

And here's ours. It looks awesome - not girly in the least. Starting to feel the first flutter in my stomach. It's raining, which means first practice will be on wets rather than slicks. Quite glad about that

Arrive at Adria and greeted by a line-up of MX-5s. Superlight looks great