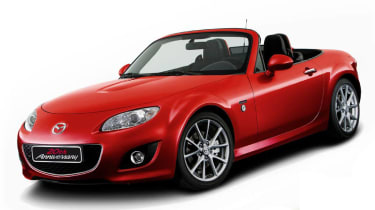 The car with more special editions than any other is about to get the treatment yet again. Next month’s Geneva motor show will see the unveiling of the Mazda MX-5 20th Anniversary Edition, with no prizes for guessing what it celebrates. Just 2000 will be built and, despite the roadster’s Japanese birthplace, this is a Europe-only special. Each MX-5 '20' gets stainless steel scuff-plates with the individual production number enscribed on them, so you can prove to everyone just how special you and your car are. The '20' gets the MX-5’s lower powered but more characterful 1.8-litre engine with 124bhp, 123lb ft of torque and predictably modest performance figures: 0-60mph takes 9.9sec and the top speed is 121mph. The dynamics should be a tad sharper thanks to a new bracing bar for the front suspension. You can spec your 20th Anniversary Edition in ‘True Red’, ‘Aurora Blue’ or ‘Crystal White Pearl’, and it comes with lashings of chrome and special edition badges. it will be available only as a soft-top, which is good news for enthusiasts who prefer the lighter, more traditional roof option. Joining the MX-5 20 on Mazda’s Geneva stand from March 1 will be the all-new Mazda 5 compact people carrier, with a trick new 2-litre petrol engine that boasts 15 per cent lower emissions. That engine also makes an appearance in the revamped Mazda 6 saloon. Cleverer still, though, is Mazda’s new SKY technology. There’ll be petrol and diesel SKY engines, both aiming to cut 30 per cent from their current equivalents’ fuel economy, while there’ll be a new SKY-Drive automatic transmission intended to ape the feeling of a dual-clutch ‘box. Lots of action, then. And if you want the most incisive Geneva motor show coverage, then from March 1 you’ll want to peruse evo.co.uk’s live show reports. You can also follow us on Twitter and Facebook.

Read about our long-term Mazda MX-5 2.0i Sport