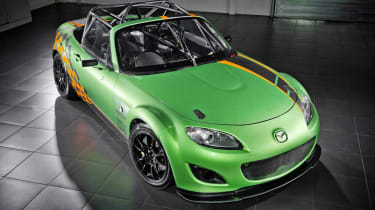 Mazda has unveiled the lightest and most powerful MX-5 it has ever created, the MX-5 GT. Designed to compete in this year’s Britcar MSA British Endurance Championship, the standard MX-5 has been completely reworked to FIA specifications. It features a modified version of Mazda’s 2.0-litre in-line four, developing 275bhp - up 117bhp on the road going version - and mated to a six-speed sequential paddle shift ’box. Jota Sport, the race engineering team that will be fielding the cars during the championship, has also extensively rebuilt the body, apparently taking over 400 hours to create a shell of such strength, it exceeds the required FIA regulations 17 times over. In accordance with Mazda’s ‘gram strategy’, in which every component is pared of unnecessary weight, Jota has also examined each aspect of the car to make it as light as possible. Further weight-saving measures extend to carbon doors, polycarbonate windows and removal of interior trim. Finally, the shell has been subjected to an acid dip to remove outer protective coats, saving 15kg. The finished car weighs in at just 850kg (a considerable 323kg less than the standard car, and less than 2009’s MX-5 Superlight concept), allowing it to cover 0-60mph in 3.0sec and go on to a top speed of 160mph. It is hoped the car’s low weight and nimble handling will put a spanner in the works of the heavy hitting Aston Martin Vantage GT4 and Porsche 911 GT3 RSR against which it will compete. The Britcar MSA British Endurance Championship calendar runs from March to November, starting with a three-hour race at Silverstone on March 26.

We go ice racing in a Mazda MX-5 roadster