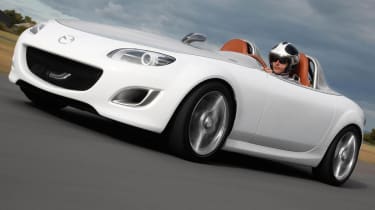 The Mazda MX-5 has now passed the 900,000 production mark, setting a new world record for sports car production. It's a car we're huge fans of at evo, several examples having been owneed by various members of our team over the years. It also made the top ten in our 100 Greatest Drivers' Car countdown.

The original's 1.6-litre, 16-valve in-line four-cylinder engine may have produced only 115bhp, but weighing just 940kg and sitting on skinny tyres meant that fun could be had whatever the speed. The second-generation MX-5 had big shoes to fill but managed to do so comfortably by sticking to the philosophy that made its predecessor so successful. The weight crept up to just over a tonne, but a small increase in power counteracted this to provide the same levels of driver interaction.

The Mk2 took the MX-5 through its tenth anniversary, when it first set the record as the world's best selling two-seater sports car with a total of 531,890 units.

In 2006, the Mk3 - and current generation - MX-5 was introduced. Once again the weight rose marginally but bigger news was the loss of the 1.6-litre engine as the entry-level model, and the introduction of a 158bhp 2.0-litre at the top of the range.

Speaking of the future, programme manager Nobuhiro Yamamoto says he will 'strive to keep the MX-5's spirit alive while evolving it into a car that will be loved by even more people.' Rumours suggest a return to sub-1000kg kerb weights, inspired by the brilliant Mazda MX-5 Superlight concept. We can't wait.

Mazda MX-5: the full story of its birth