The 205bhp MX-5 concept was driven at Goodwood, and this video gives us a driver's eye view of the run up the hill in the GT 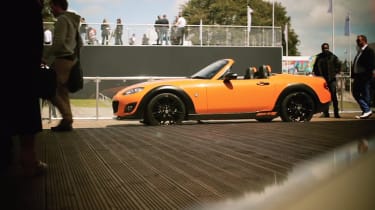 Mazda recently launched the MX-5 GT at the Goodwood Festival of Speed, a one-off prototype - developing 205 normally-aspirated bhp. Mechanical upgrades include a new exhaust, uprated throttle bodies and a pair of high-performance camshafts - increasing power from the 158bhp of the standard 2.0-litre. The rev-limit has also been increased to an almost Honda-like 7800rpm.

Some MX-5 enthusiasts have been crying out for more power since the car first appeared in 1990, and with companies like BBR churning out turbocharged (and supercharged) versions, there is obviously a market for a more focussed, and powerful driving machine. Mazda has not yet confirmed production of the GT.