First picture of the chassis and engine that will underpin the new Mazda MX-5 roadster. Video and full details here 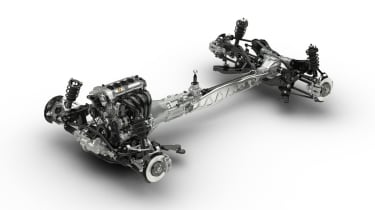 Mazda has revealed first details of its new MX-5 roadster at the New York motor show. As sales of the front-engine, rear-drive sports car approach the one million mark, this is our best preview yet of Mazda’s fourth incarnation.

Just the one picture has been revealed so far, showing the new MX-5’s ‘Skyactiv’ chassis and transmission. The in-line four-cylinder petrol engine sits behind the front axle, allowing this to be classed as a front-mid-engined car. That aids a 50:50 weight distribution, which alongside a lower centre of gravity than the car it replaces plus a 100kg cut in weight, bodes well for how the new roadster hill handle. It’s already a bit of an affordable performance hero, and sharper reactions ought to boost that profile further.

The engines themselves haven’t been spoken about, but among Mazda’s Skyactiv petrol engines are 1.5- and 2-litre units, and happily, they avoid the current turbocharging default. The Mazda 3 is available with a 163bhp 2-litre normally aspirated engine, and this would seem a shoo-in to succeed the 158bhp 2-litre that does service in the mk3 MX-5 Sport Tech. That model weighs 1248kg in hard-top form, suggesting a figure of around 1150kg for an equivalent mk4. If soft-top versions continue to be offered, we could see a smaller-engine MX-5 that gets close to the 1000kg mark.

With a manual gearstick sprouting from the middle of the chassis and rear-wheel drive, everything seems in order with little to upset the MX-5’s rather traditional recipe. Mazda chairman Takashi Yamanouchi admits ‘the history of the MX-5 is one of changing everything in order to stay the same. A history of innovating in order to preserve the ideal’. An automatic gearbox is expected to be on the options list, however.

While there are no hints at the exterior design of the new car, there is at least a new MX-5 to look at in New York. It’s another special edition, this one marking 25 years since the original’s Chicago motor show debut. Available exclusively as a 2.0 Roadster Coupe, it comes only in Soul Red, with black contrasting, a white leather interior and Bilstein dampers as standard.

The new Mazda MX-5 is set to share its underpinnings with the next Alfa Romeo Spider, though recent rumours have suggested the partnership is in doubt. Prices are yet to be confirmed but a starting point below £20,000 is predicted. Value for money has always been an MX-5 strong point, and the new car is unlikely to change that.