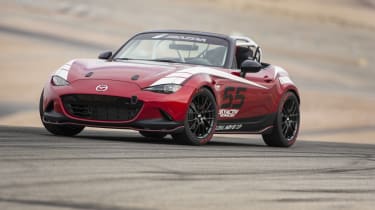 Mazda has announced that its new MX-5 will be available in racing form, specifically designed to go racing in its own international one make series in 2016 called the Mazda Global MX-5 Cup. Making the announcement at the SEMA show in Las Vegas, the Japanese carmaker confirmed that the race-spec MX-5 will be prepared by an independent supplier, and will compete against other identical MX-5s in series run in Europe, North America and Asia.

The top finishers from each continent’s series will then meet at a Global Shootout at California’s Mazda Raceway Laguna Seca at the end of 2016. The eventual winner will receive a one-day test in a Mazda TUDOR United States SportsCar Championship SKYACTIV prototype, a racecar that bears resemblance in both appearance and performance to the downforce laden LMP2 cars of Le Mans.

Whilst new to the international scene, MX-5s have featured in a popular racing series in the US for some time now. John Doonan, the director of motorsports for Mazda North American operations said: ‘Since the first Mazda MX-5 took the green flag back in 1990, the car has been the ideal platform for both veterans and rookies alike. Because the MX-5 is inherently such a good car to drive, it is an ideal platform to learn basic and advanced race-craft.’

The latest fourth-gen car is perhaps the most track-ready MX-5 yet, with a kerbweight some 100kg less than its predecessor and perfect 50:50 weight distribution. Though the roadcar will be available in either 1.5- or 2-litre guise, the racecar will only be fitted with the larger of the two SkyActiv units, which is also the sole option to be made available in the US.  We expect it to produce at least 165bhp in road form, so a figure around 200bhp looks likely for the racer.

Technical details remain unconfirmed for now, but we wouldn’t be surprised to see the MX-5 Cup wear slicks, sit on adjustable suspension, use uprated brake pads and breathe through a less restrictive intake and exhaust system. To conform to racing regs, a roll hoop, race seats and harnesses will be added to the stripped interior, but otherwise the car should remain fairly standard.

‘It has long been our goal to see Mazda fans around the world competing in identical MX-5s,’ confirmed Doonan. ‘The launch of the 2016 MX-5 is the perfect time to make this goal a reality.’