It's the internet's default 'answer to everything', but should you buy Mazda's evergreen roadster? 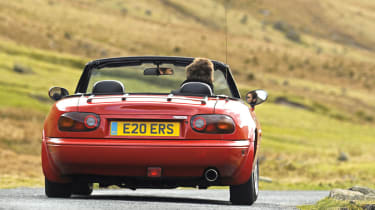 The Mazda MX-5 has long been a great choice for keen drivers looking to cut their teeth on an inexpensive rear-wheel drive car.

For that reason, the car has taken on an alternative persona on the internet as the default answer to every motoring-related query. Fun on a budget? Reliable daily-driver? Five-seat SUV with room for the dog? The answer is – often inexplicably – MX-5.

There are far too many great performance cars out there for this to be the case in evo’s world – but there’s still a lot to commend the MX-5. With the earliest examples now 26 years old, is a Mk1 MX-5 still a wise purchase? Read our full buying guide of the Mazda MX-5 Mk1 for even more tips.

It’s all quite simple to understand when you peer under the bonnet. The MX-5 is powered by a 1.6-litre, twin-cam, four-cylinder petrol engine, mounted longitudinally. It even looks like an actual engine, rather than a storage area for spare chunks of black plastic.

In standard tune – it’s still relatively easy to find MX-5s that haven’t been modified, thanks to their sheer numbers on the market – the four-pot produces 114bhp at 6500rpm and 100lb ft of torque at 5500rpm. Despite the high revs needed to reach peak torque, the little unit is nevertheless quite tractable from low revs.

From 1994, a 1.8-litre version was also available (producing 131bhp), with a detuned 1.6 joining the range. With only 89bhp it’s certainly not the most desirable engine option, and many would suggest that even the earlier 1.6 and the 1.8 feel a bit short of urge sometimes.

The power units have a zingy character though and great throttle response, which encourages you to seek out the red line. Its five-speed gearbox is one of the MX-5’s best features – the shift is short, sharp, a little notchy but incredibly satisfying to slot through the gate. And naturally, the MX-5 is rear-wheel drive – so offers up plenty of potential to play. 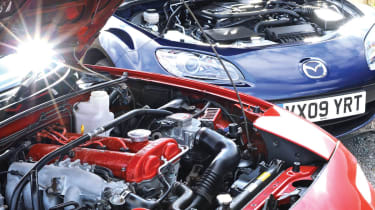 The MX-5’s chassis arrangement was relatively exotic at the time (for such a humble car), with double unequal-length wishbones at all four corners rather than more prosaic struts or a live axle.

It’s light too, the earliest cars officially tipping the scales at 940kg. What it isn’t is particularly rigid by modern standards – the chassis can flex on bumpy roads (though not appallingly so), the steering wheel jiggles and while the MX-5’s build quality is good, it does result in rattles here and there. Luckily, the aftermarket offers several solutions for stiffening up the shell – from brace bars that attach to the floorpan to full roll cages.

It’s not as sharp as some modern sports cars, but that can be a virtue in some instances. In evo 131, Henry Catchpole described this as ‘part of the magic, because where it takes slightly longer to turn and lean into a corner it also spends longer actually in the process of cornering’.

He added that, ‘There isn’t really the power to work the rear tyres very hard (unless it’s wet) yet still all four are involved as the balance reacts to lifts of the throttle or dabs of the brake or changes in lock’.

If you get your kicks from outright speed, then you might as well stop reading here and click elsewhere on the site. The MX-5 is not a fast car.

However, it’s not a truly slow one either and with the roof down you’ll be having far too much fun to notice diesel repmobiles wafting past, their drivers mid nose-pick. Bank on somewhere between 8.5-10 seconds to 60mph, according to period road tests, and you need to work for that reward. 1.8s are only marginally quicker, as they’re heavier too – but their longer gearing and greater reserves of torque make them better motorway tools.

Again, it’s the nature, rather than the quantity of performance that matters for the Mazda roadster.