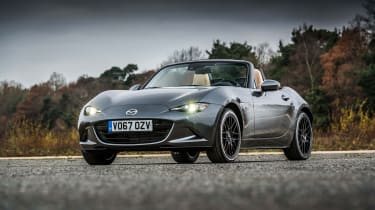 Mazda has revealed its new MX-5 Z-Sport, a limited edition version of the world’s best selling sports car. Due to go on sale in March 2018 with a price of £25,595, only 300 examples of the UK-only limited edition will be built.

The revival of the Z-Sport moniker – seen on the previous third generation MX-5 range – delivers a host of superficial changes inside and out. Based on the 2-litre Sport Nav model, the Z-Sport will also feature the revised suspension and steering announced at the 2017 Tokyo motor show, according to Mazda UK, who confirmed the chassis-based changes will be rolled out to all 2018 MX-5 models.

Sand-coloured leather covers the seats, door cards and the bottom half of the dash, while the floor mats and scuff plates bear the Z-Sport name, as does the plaque on the dash, displaying the car’s build-number in the Z-Sport series production run.

Externally the Z-Sport is finished in machine grey metallic paint with a contrasting cherry-red fabric roof, an exclusive color combination for the Z-Sport, which also incorporates the black 16-spoke, 17-inch BBS alloys.

The chassis refresh constitutes a rear-suspension retune and recalibration of the power steering to improve the driving experience to better align it with Mazda’s well-known Jinba-ittai principle, while the strut brace, Bilstein dampers and a limited-slip differential have all been carried over from the Sport Nav model. As has the 2-litre four-cylinder engine producing 158bhp which will be mated to a six-speed manual gearbox. 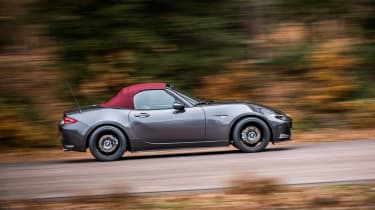 Special-edition Mazda MX-5s are nothing new, and have made up a sizeable proportion of sales that has helped shift over a million units of the diminutive roadster across all four generations.

Speaking about the new model, Jeremy Thomson, Managing Director Mazda Motors UK said, “We’ve had a long tradition of producing distinctive limited edition MX-5s that allow customers to drive a sports car with stand-out looks and enhanced equipment, and the new Z-Sport is one of the best yet. The stunning combination of the cherry red roof and Machine Grey Metallic paint make this one of the most exclusive looking MX-5s we’ve ever offered”.