Exclusivity and a buoyant resale value guaranteed if you buy a 'Mac'. But they don't come cheap 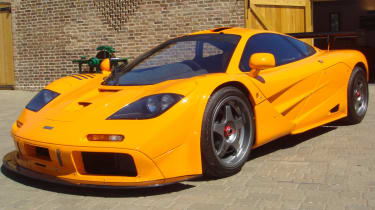 There can’t be many opportunities to drive to Le Mans in a car that competed there, but that’s exactly what you could be doing next year if you have a spare £1.6million kicking around. DK Engineering of Chorleywood have this former Team Bigazzi F1 GTR for sale (chassis number 016R), which after finishing 11th in the world’s greatest sportscar race was converted into a road car.

In 1996 this was the number 38 Fina/BMW-liveried car driven by Steve Soper, Jacques Laffite and Marc Duez, and it would have finished significantly higher up the order had the gearbox not needed replacing. The car was converted for road use by Paul Lanzante (who also prepared the GTR that won Le Mans in 1995) and it was then repainted ‘Historic Orange’ by McLaren for its new owner.

Many of the original parts that were removed during the conversion come with the car, but unlike the regular road cars there is only room for one passenger as the space for the seat to the driver’s right is taken up by a fire extinguisher, the engine management system and the race panel crammed with switches and fuses. A pair of ear defenders on the seat highlights just how raw it’s likely to be inside, but this has to be the ultimate trackday toy, although it is still eligible for the GT90 series if you fancy racing it.

F1 prices continue to remain strong, but this particular example has been with DK Engineering for several months now and, as they would like to move it on, the price has recently been dropped by £400,000. If you look at it that way it makes this car a comparative bargain.

• Exterior Completely perfect, with not a scratch or scrape anywhere• InteriorLooks every inch the racer it was, but it’s presented in concours condition• MechanicalsIt’s on the button and ready to go• Should I buy it?If you’ve got the cash and can live without the comfort and useability of the regular F1 road cars then why not?• FOR: Stunning car with proper history• AGAINST: We would have kept the iconic race car livery