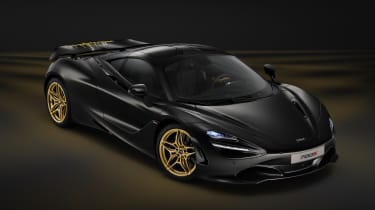 A Dubai-based customer commissioned a bespoke 720S inspired by his home nation and the words of Bruce McLaren. Now McLaren MSO has revealed the first pictures of the car ahead of its public outing at the 2017 Dubai motor show.

McLaren Special Operations has once again been called upon to create a unique version of the firm’s supercar for one lucky customer. This 720S gets a unique paint scheme that has been personalised according the owner’s wishes, with a quote from company founder, Bruce McLaren, painted on the car in Arabic script.

The Zenith Black paint with a satin finish contrasts with a set of gold wheels that are unavailable on the McLaren configurator and a gold engine heat shield. Inside, the dark interior is broken up by more gold details including the door cards, paddle-shifters and steering wheel inserts. Carbonfibre dominates the driving environment, adorning the centre console, the steering wheel and folding display behind it. The remaining soft touch surfaces are upholstered in alcantara and leather.

The most notable personal touch is found on the rear-wing which bears a quote by Bruce McLaren, painted in gold. It reads ‘Life is measured in achievement, not in years alone’. The visual presentation of the text, written in Arabic, mimics the towering, Dubai city skyline. As confirmation that this particular 720S configuration won't be repeated, the sill has been branded with a plaque displaying the make, model and a build number showing the car is ‘one of one’.

120 hours – on top of normal production time – were required to deliver the unique specification, a quarter of that extra time was spent on the rear-wing alone. The MSO based customisation details have been combined with carbonfibre packages included in the 720S Performance trim-level. So the front splitter, air intakes, rear bumper and roof panel are just some of the body parts formed by the lightweight material.

Mechanically, the car is no different to the standard Mclaren 720S with a 4.0-litre twin-turbo V8 producing 710bhp and 568lb ft of torque. The car is on display as McLaren's star exhibit at the 2017 Dubai motor show which kicked off today.