McLaren 600LT given the MSO treatment for Pebble Beach 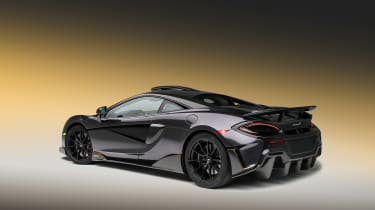 McLaren Special Operations will reveal a restyled 600LT on the lawn at Pebble Beach as it applies its usual combination of bespoke finishes and features on McLaren’s exciting new track-focused Sports Series model.

As is usually the case with MSO projects, this 600LT doesn’t feature any mechanical upgrades over the standard 600LT, but it does feature a suite of bespoke styling elements, including a fully functional carbonfibre roof scoop sat within a new carbonfibre roof panel. Funnelling air in from the outside, it enters the cabin via an internal carbonfibre intake before breaching the firewall and joining the intake plenum. Although it doesn’t raise power outputs, it does increase induction noise, according to McLaren.

The 600LT is painted in an exclusive MSO hue called Stealth Grey, contrasted with orange highlights that have been applied on the leading edges of its additional carbonfibre exterior components. Matt black stripes have also been laid down the centre of the car. 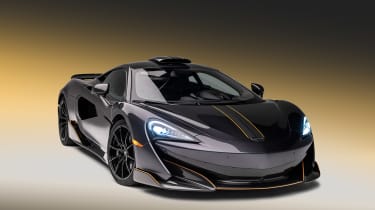 All three of the optional Carbon packs have been applied here, with the lower front bumper, splitter, sills, side intake surround, rear bumper, diffuser, wing and exterior door mirrors all in gloss-finished carbonfibre, while MSO-specific canards, front wing louvres and roof are also carbonfibre too. The wheels are the standard lightweight design, finished in gloss black.

Inside, a similar aesthetic has been applied, with the same stunning Senna-sourced  carbonfibre buckets finished in black leather with contrasting orange stitching. Elsewhere in the cabin, the dash and centre console are finished in, you guessed it, yet more carbonfibre.

As one of MSO’s more subtle works, this 600LT still has a clear focus of being McLaren’s track-orientated junior supercar, but still represents the lengths that buyers can go to personalise their McLaren supercar.