The new McLaren GT is not just a new variant, it’s also the first of McLaren’s new GT family 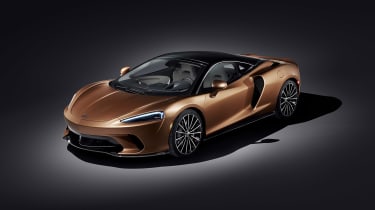 McLaren has its sights set on Aston Martin and the traditional grand tourer establishment with the launch of its first GT. The new mid-engined two-seater supercar might not look like a traditional GT, but with a more relaxed driving experience, smoother styling and improved practicality, McLaren is hoping its buyers won’t mind their GT lacking the traditional front-engined layout. Priced from £163,000, the new car will sit in its own model family within the McLaren range, and rival everything from an Aston Martin DB11 to the Ferrari GTC4 Lusso T as a real everyday McLaren.

Despite the noise McLaren is making about this all-new model, underneath the new bodywork is the familiar pairing of a carbonfibre tub chassis and a 4-litre twin-turbocharged V8 engine. The tub is a heavily revised version of the 720S’s, and is called MonoCell II-T, denoting its Touring focus, which has been reshaped principally to facilitate a larger load area above the engine. To do this, engineers have set the engine even lower in the chassis and repackaged the exhaust to unlock a total cargo space of 420 litres – a Ford Focus has 375 litres for reference. A further 150 litres of storage space is available under the bonnet too, combining for a 570-litre total, 10 litres more than in a Volvo V90 estate.

The cabin itself is closely based on the one found in Sports Series models such as the 570GT, but refines the formula with an emphasis on improved material quality and new tech. A substantial upgrade to the troublesome infotainment system will be welcome news for current McLaren customers – an essential consideration if this is being sold against GT-like rivals from Aston Martin and Porsche. Machined aluminium and new leathers highlight the interior, which McLaren also says has undergone a substantial hike in build quality – a weak point in some McLaren models in the past. Building on the airy feel thanks to the glazed C-pillars and an open rear deck is an optional electrochromic glass roof, which is able to darken itself instantly to one of five levels of tint. New interior finishes, including an industry-first application of cashmere, will be available on the options list for those wanting something different to the usual Nappa leather finishes.

The powertrain is typical of McLaren combining a revised version of the 4-litre twin-turbo V8 found in the 720S. Designated M840TE, the power unit in the GT produces 611bhp (99bhp less than the 720S), with 465lb ft of torque (103lb ft down) available between 5500 and 6500rpm. Ninety five per cent of that is available from as low as 3000rpm, though, giving the GT considerable low-end shove. Power is sent to the rear wheels via the same seven-speed dual-clutch transmission and open differential. Performance figures are still very brisk as a result, the GT reaching 62mph from rest in 3.2sec, 124mph in 9.0sec and going on to a top speed of 203mph. Helping to achieve those impressive numbers is the GT’s low kerb weight, which at 1530kg is significantly less than that of an Aston DB11 or even a new Porsche 911 Carrera 4S.

Despite the magic carpet ride quality associated with the 720S’s hydraulically cross-linked ‘Pro-Active Chassis Control’ suspension, the GT instead utilises the more traditional double wishbone system borrowed from the Sports Series models. The dampers are adaptive though, and now have a wider window of operation between their softest Comfort and hardest Track modes than other Sports Series models. In addition to this, the GT features an updated Optimal Control Theory algorithm, borrowed from the 720S, to actively scan the road to prepare the dampers for any incoming surface irregularities. The McLaren GT maintains its hydraulic power steering too, promising to keep McLaren’s finely wrought steering feedback and accuracy. Steel brakes are standard fit, but buyers can fit a combination of carbon-ceramic brakes and forged alloy wheels from the options list. 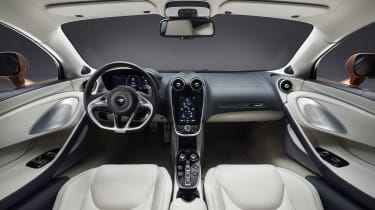 The all-new exterior design is unique to the GT, with a more understated look compared to its Sports and Super Series siblings. At 4.7m long, it’s the longest McLaren yet (Speedtail aside, again), and features staggered wheel sizes at 20 and 21 inches on the front and rear axles respectively. The GT has clearly been designed to appeal to a more conservative audience – one that has a deeper appreciation of subtlety and sophistication. McLaren has also emphasised practical elements like approach and departure angles, and a taller ride height aiding those tricky mountain or beach-side holiday home driveways.

The GT is available to order immediately from McLaren dealerships, with the first deliveries to customers due before the end of this year. As the first of its model type within McLaren, we expect further derivatives of the GT to eventually appear, including a likely drop-top to satisfy the high number of GT buyers that prefer the open-air experience.