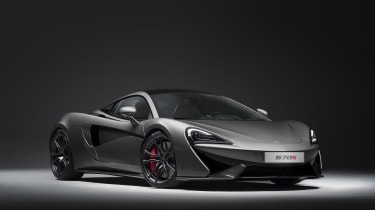 McLaren has announced a new Track Pack option for the 570S Sport Series coupe, which reduces weight and increases downforce of the 562bhp coupe. Available to order now the Track Pack will cost an additional £16,500 on top of the price of a regular £143,250 570S.

Inspired by the McLaren's inclusion in GT3 and GT4 racing, the 570S Track Pack features a new 12mm higher rear wing compared to the standard car, which is designed to increase downforce by as much as 29kg at 150mph to improve stability in high(!) speed corners. The new rear wing is unique to cars fitted with the Track Pack and won’t be made available on other Sport Series models.

Other elements of the Track Pack include a weight loss programme that has allowed McLaren to reduce the 570S kerb weight by 25kg (Track Pack equipped cars will weigh 1288kg dry). The weight savings are achieved by replacing the leather trim covering the dash, steering wheel and seats with alcantara and fitting new, lighter carbon fibre race seats.

A sports exhaust and a McLaren Special Operations roof also contribute to the weight loss, so too does a set of lighter alloy wheels. With a top speed of 204mph and a 0-124mph time of 9.4 seconds a Track Pack equipped 570S has the same top speed but is a tenth quicker to 124mph than a standard 570S.

Understandably - or perhaps naively - McLaren expects the majority of 570S models fitted with the Track Pack to spend their time on track (we do hope they won’t disappear into car storage) so will also equip each example with its proven Track Telemetry system as fitted to the 675LT and P1.

All 570S Track Pack cars will retain the 3.8-litre, twin turbocharged V8 engine fitted to all McLaren's Sport Series mdoels, with power remaining untouched at 562bph produced at 7500rpm and 443lb ft available from 5000rpm through to 6500rpm. As with the reduction in the 0-124mph time we expect Track Pack cars to improve on the standard 570S’s claimed 3.1-second 0-60mph and 6.3-second 0-100mph times.

So there you have it, a more focussed, track orientated option for the finest car McLaren road car currently on sale. Excellent. 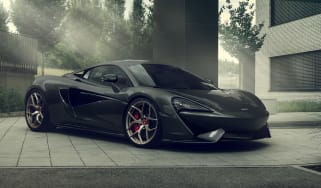 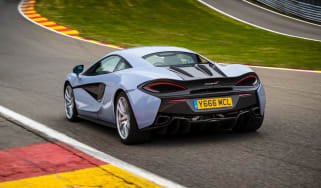