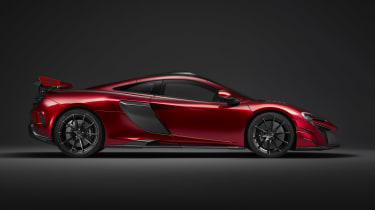 McLaren has revealed details of the upcoming MSO HS – the latest car in the firm’s Super Series that splits the performance gap between the 675LT and P1.

It’s based on the Super Series coupe bodywork, but fettling by McLaren Special Operations has resulted in a power boost, a shedding of weight and an increase in downforce, along with some striking visual changes.

At the MSO HS’s heart is the same 3.8-litre twin-turbocharged V8 installed throughout the McLaren range, but in this configuration power and torque are increased through blueprinting, hand-polishing of the exhaust ports and a flow-optimised crossover muffler with titanium exhaust tips.

A new aerodynamic package ensures that power is transmitted to the tarmac. Most obvious is the use of a large rear wing inspired by the similarly prominent scaffolding on the back of the P1 GTR.

Despite appearances, it’s not a simple fixed wing, but retains the functionality of the Super Series cars’ usual airbrake, with a range of settings configured by McLaren’s chief test driver, Chris Goodwin. Along with carbonfibre dive planes and full length side skirts, the MSO HS can generate as much as 220kg of downforce at 150mph. 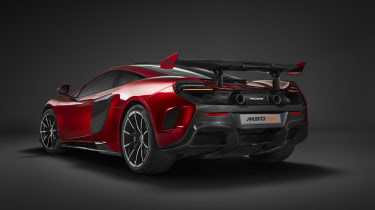 Elsewhere, efforts have been made to reduce weight. The front bumper and splitter are both carbonfibre, as are the bonnet, those side skirts, the roof, the overhead induction scoop and the engine bay.

The windscreen glass is thinner, while the engine cover is polycarbonate. The interior is subdued in colour but not in McLaren’s choice of materials – liberal use of Alcantara not only gives a suitable motorsport feel but also sheds 3.5kg over the equivalent leather trim – a figure you can add back if you request Nappa leather.

The P1-derived seats offer a 15kg saving thanks to carbonfibre construction and the heating and ventilation system is controlled via the central IRIS touchscreen (which also includes McLaren’s Track Telemetry system), rather than using separate controls, also to save weight. Satin-finish carbonfibre, like the Alcantara, is almost everywhere you look.

Sadly, in common with other recent McLaren specials, all 25 examples of the MSO HS have already been accounted for. We can’t even furnish you with a price, since the highly individual nature of each car means no two will be the same – though it’s safe to expect a healthy increase over the £259,500 you’d pay for a 675LT.