First McLaren since the F1, the MP4-12C supercar, officially revealed. Faster than a Ferrari 458 Italia 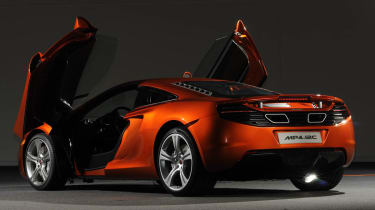 The new McLaren MP4-12C supercar is officially presented to the media today, and evo is there to see the unveiling.

VIDEO: Button and Hamilton drive the McLaren MP4-12C on track

It’s the firm’s first road-going performance car since the legendary McLaren F1, which made its debut two decades ago.

The MP4-12C is a different kind of car to the 240mph+ F1, though. It will fight its battles in the supercar, rather than hypercar class, taking on the Porsche 911 Turbo S, Ferrari 458 Italia and Lamborghini LP570-4 Superleggera.

And today’s announcement from McLaren is a strong one – the MP4-12C will be faster than the lot of them.

The MP4’s top speed is north of the magic 200mph, too. And its target £175,000 price will see it fight the Ferrari and Lambo directly when order books open globally in two to three months.

Speed isn’t everything for McLaren, though. The company’s MD, Antony Sheriff, puts top-notch customer service above a fast lap time, and much of the press conference talk was of completely surpassing rivals, offering a fully useable supercar and putting exclusivity and excellence above being the biggest supercar manufacturer. In a market that’s had such tumultuous times of late, that seems a wise philosophy to have. Technology is a forte of the MP4-12C too, of course. Part of its development took place on the McLaren’s motorsport simulator, the most advanced of its type in the world, while the MP4’s brake-steer and airbrake tech (full details in our MP4-12C tech piece, here) are Formula 1-inspired.

See McLaren's F1 drivers, Hamilton and Button, rate the MP4-12C Extensive levels of engineering know-how have been ploughed into the MP4, too. It has hit one million miles of development testing, between temperatures of -50 and +50 degrees Celsius. Its carbon tub saves weight and is incredibly strong, withstanding two 56mph crash tests with not a speck of damage, while the desire to keep mass to a minimum is almost obsessive – to save 2.4 grams from the kerb-weight, the McLaren logo is engraved, rather than embossed onto the instrument panel. A bit OTT, perhaps, but it’s entirely befitting to McLaren’s belief. ‘Everything needs to be the best. Because in McLaren, good enough is not good’ says Sheriff. Wonder how that makes Ferrari and co. feel?

VIDEO: Button and Hamilton drive the McLaren MP4-12C on track

VIDEO: Jenson and Lewis pull wraps off the MP4 at today's launch

See Ollie Marriage's behind the scenes pics from today's launch

The mighty McLaren F1 takes on other performance car legends