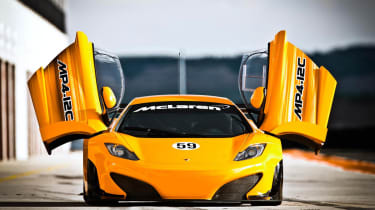 More details of McLaren’s MP4-12C GT3 racing car have been revealed. It’s the first McLaren car to compete in FIA GT racing since the McLaren F1 GTR finished production 14 years ago. McLaren GT (the name for the collaboration between McLaren and CRS Racing), boasts that the MP4-12C will be the most reliable, efficient and easy to drive GT3 car, traits it should share with the road-going McLaren supercar that wowed evo’s Chris Harris. (Video here). Twenty MP4-12Cs have been homologated for GT3 racing in 2012, while the car will debut in a selection of races this year, including endurance racing at Magny-Cours and Silverstone as well as the 24 Hours of Spa at the end of July. Before that, it will entertain crowds at the 2011 Goodwood Festival of Speed, with runs up the famous hill from July 1 to 3. Specs wise, the MP4-12C has actually been detuned for GT3 racing, from the road car’s 592bhp to 493bhp. Its engine calibration and ECU are unique, with technology borrowed from McLaren’s vast Formula 1 experience, while there’s a bespoke six-speed sequential transmission developed in partnership with Ricardo. It’s an impressive 80kg lighter than the seven-speed gearbox used in the showroom MP4-12C. Other key changes from the standard McLaren MP4-12C include a plethora of aerodynamic tweaks, comprising a new front splitter, door blade, rear wing, diffuser and louvres in the front fenders. Crafted in carbonfibre, bending any of it during racing is likely to lead to a mildly painful bill. The 12C’s signature carbon tub ‘MonoCell’ remains while the steering wheel is lifted from Lewis Hamilton and Jenson Button’s MP4-24 Formula 1 car. McLaren GT promises a thorough customer support programme for teams running an MP4-12C GT3 next year, and reckons demand could stretch to five times its planned build, but a desire to keep retained values high and customer service luxurious has seen the initial production run kept at 20 cars.