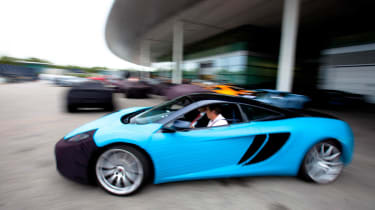 McLaren has responded to criticism of the newly launched MP4-12C by rushing through a package of revisions for the newly-launched supercar. What’s even more impressive is that it took the company just eight days to create the modified version of the car – which evo’s Harry Metcalfe was first to drive. When the MP4-12C lost out to the Ferrari 458 in our grouptest (evo issue 159) Harry sent a personal message to Anthony Sheriff, McLaren’s MD, outlining some of improvements he thought could be made to the car. These included changing the weighting of the gearchange rocker mechanism, tweaking the steering and improving the sound of the car. Much to Harry’s surprise, just eight days after sending the email he was invited to McLaren HQ in Woking to sample a revised version of the car incorporating the changes that he had suggested – which McLaren is planning to incorporate into future production versions. Harry’s verdict: ‘it’s vastly better.’ ‘In F1 there’s no time to mull things over,’ said Anthony Sheriff, ‘you look at a situation, you make a decision and you get the solution on the car for the next race. In the car division we reflected on the comments made, looked at alternative solutions and had them on cars within a day or two and now they’ll be going into production. At McLaren we have the mentality to react to things very quickly.’ You can read the whole story in issue 160 of evo magazine, on sale now. More details and ways to buy your copy in print, on iPad or on Zinio here

UK firm SB Motorsport is shoehorning the powertrain from a Nissan GT-R under the body of a Navara, and progress is coming along nicely
Visit/mclaren/203132/mclaren-765lt-2020-review-latest-long-tail-returns-to-reset-the-status-quo

McLaren’s latest Long Tail fulfills its brief in once again pushing the supercar to the next level, the 765LT just has to prove its magic on the road …
Visit/lexus/lc500/convertible