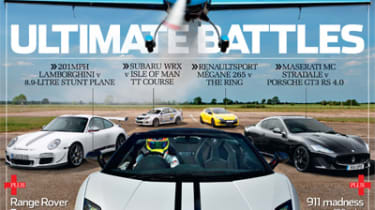 Buy a copy of evo 160 in our online shop

News The McLaren MP4-12C suffered at the hands of its supercar rivals in just about every magazine test. Find out how its flaws are being put right in this evo exclusive   First drives Ranger Rover Evoque Si4, VW Golf GTI Edition 35, BMW 640i Coupe, Mini JCW Coupe, MG6 Magnette, Audi Q3, Jeep Grand Cherokee, Westfield Sport-E, Infiniti M35h   Letters Plenty of McLaren debate, plus a discussion on guilty pleasures. If you lust after the likes of an Isuzu Piazza or Vauxhall Senator on the sly, you’re not alone   Ultimate Battles Everyone loves a good fight. First up, the Porsche 911 GT3 RS 4.0 faces stiff competition from the Maserati MC Stradale, an equally hardcore but potentially more emotive rival. Continuing the Porsche theme, Chris Harris battles 99 other racers in a 911 Cup car at the Nürburgring, and we're back at the Ring to see Renault’s Mégane 265 Trophy go for the front-drive lap record. Subaru guns for the four-wheeled record for the Isle of Man TT course, with dramatic consequences, while we pick the best rwd, manual V8 saloon from an eclectic bunch: Panamera v BMW M5 v VXR8. And our headline battle sees Top Gun take on Top Ginge, RAF pilot v Roger Green, stunt plane v supercar   New Porsche 911: first ride The third all-new 911 in 47 years has been racking up the test miles in African heat. Richard Meaden joins the development team to unravel the secrets of 2012’s eCoty   Porsche 961 racer Le Mans’ only four-wheel-drive entry hasn’t turned a wheel in anger since it was engulfed by flames in 1987. Now restored, the first person to drive it in public is Roger ‘Fireball’ Green. Could be interesting…   Pagani Huayra: first ride exclusive Pagani’s number one fan (he has a certificate and everything) Harry Metcalfe experiences the all-new Huayra   Long-term tests End-of-term reports on the Insignia VXR and Mazda 3 MPS; hello to an Aston Rapide and BMW 1M Coupe   evo Showroom Our packed, new-look Showroom section kicks off with a Lancia Delta Integrale buying guide and boasts new Speedshop, Workshop, Trips and travel and Track and Racing sections   Me and My Car Derek Bell and his Porsche 924 GTS

Buy a copy of evo 160 in our online shop