McLaren has revealed a mad one-off concept called the X-1, created for an anonymous McLaren customer by their special operations department 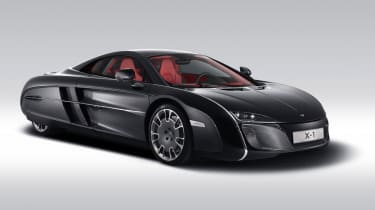 McLaren has uncovered a one-off concept car called the X-1 at the exclusive motoring event 'The Quail'. Based on the 12C, the concept was built by McLaren Special Operations (MSO) - the division of the company that focuses on bespoke projects.

In a similar style to the recently unveiled one-off SP12 EC by Ferrari for guitarist Eric Clapton, and the Lamborghini Aventador J, the car was built to order for a wealthy car enthusiast - in this case anonymously.

Under the new carbon fibre body, the car uses a modified version of the 12C's MonoCell structure, which allows for a different look, while retaining the driving characteristics and twin-turbo V8 of the standard McLaren.

The project began three years ago during a conversation between company chairman Ron Dennis and the anonymous client, who already owns a McLaren F1. He wanted a supercar that suited to his personality.

Hong Yeo is the designer in credited to the styling of the X-1. Korean-born RCA graduate, Yeo was chosen and directed by Frank Stephenson to design the special project.

The X-1 even had its own development programme, because the owner didn’t want a fragile concept car that couldn’t be used. Part of the brief was that it could be driven legally on the road, and capable of travelling at supercar speeds in safety.