McLaren MP4-12C styling too tame? This Hamann Memor tuning package should fix that... 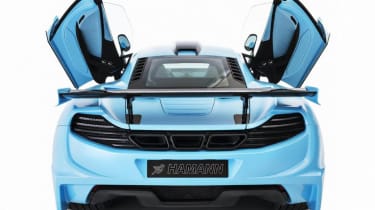 Some people have accused the McLaren MP4-12C as being too tamely styled. A new styling package by German tuner Hamann could be the answer to their woes. Or provide a reminder of being careful what you wish for… It’s fair to say the 12C’s looks have been turned up well past 11, with new front splitter and rear diffuser treatments, a large, fixed rear wing and some notably extended bumpers and wheel arches. And that’s before we’ve had time to mention the new side skirt/air vent/door combination. It’s certainly a muscular looking supercar, and the two-tone colour scheme of this blue Memor only serves to decrease the Hamann McLaren’s subtlety. The alloy wheels are 21in units, seen here in black with sky blue rims, the rear two quite deeply dished. While there’s no glimpse inside this Memor, any combination of leather, carbon, wood or Alcantara is possible, for better or worse. The cost of this McLaren MP4-12C-based Hamann Memor is 95,000 euros plus taxes; at current exchange rates that’s £95,000. Include the cost of a well-equipped 12C and you’re heading past £300,000. It’s unlikely you’ll ever park alongside another, though.