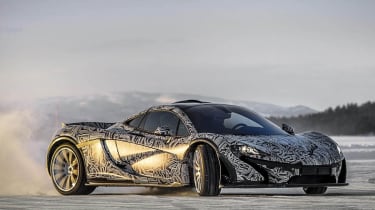 McLaren’s tireless P1 promotion continues. A drive in the car is months away, but we’re teased about the fun that awaits with the British supercar maker’s latest video, which shows the hybrid hypercar sliding around on the snow during cold-weather testing.

Part of its extreme condition testing includes visiting the frozen lakes of the Arctic Circle, presumably to make sure its components all fully function when the mercury drops into the double minus figures. It could all be an elaborate ruse for the test drivers to spend their working days looking out of the side window, though; the McLaren’s 903bhp total output and rear-wheel-drive layout ensure it’s only too happy to relinquish grip and indulge its driver in a lengthy drift when the ground is icy.

Subscribe today to have every issue of evo delivered straight to you. You'll SAVE 39% on the shop price, and get evo for its original cover price for a whole year!
Subscribe now
The McLaren P1 will battle the new LaFerrari with a similar petrol-electric drivetrain, the combination of a tuned up version of the MP4-12C’s 3.8-litre twin-turbocharged V8 and an electric motor resulting in 903bhp. That figure lags a little behind the Ferrari’s 950bhp (with a naturally aspirated V12 combining with an electric motor), though both claim a 217mph top speed and a 0-60 time comfortably less than three seconds. The McLaren costs £866,000, the LaFerrari will top £1million; the most expensive and exciting twin test of the year should be a corker.
McLaren P1 vs LaFerrari specs and pictures
Follow us on TwitterFollow us on FacebookEmail us