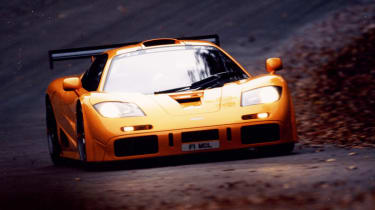 McLaren will showcase three legendary cars as part of its 50th anniversary celebrations at the Goodwood Festival of Speed. The new 903bhp P1 hypercar will also make its moving debut. The McLaren motorsport dynasty began in the US in 1963, Bruce McLaren competing in various group 7 races in the McLaren M1. McLaren will use this year’s Goodwood Festival and Le Mans 24 hours to celebrate 50 years of its motorsport participation, bringing along three very special F1s, and a P1, which will take part in Goodwood proceedings.

Browse McLaren race cars for sale on evo (really!) The 1995 Le Mans winning F1 GTR F1/01R will appear as part of the trio. The announcement of its presence at Goodwood comes 18 years to the day that the car, bearing number 59, crossed the line at La Sarthe under the guidance of Yannick Dalmas, J.J. Lehto and Masanori Sekiya. The car's full and dramatic story is here.Joining it will be the F1 LM, built in celebration of Le Mans victory and finished in classic McLaren Papaya Orange. The Gulf liveried F1 GTR F1/20R ‘Longtail,’ which finished second overall in 1997, completes the trio. Other classic McLaren racers will appear, with the full anniversary line up to be announced shortly. The McLaren P1 - which boasts hybrid technology and a 217mph top speed, and will rival the new LaFerrari - is set to make its global ‘dynamic debut’ at the 2013 Festival of Speed, which takes place on July 12 to 14.