In 1995, the McLaren F1 went racing, culminating in an assault on Le Mans. Here's the story 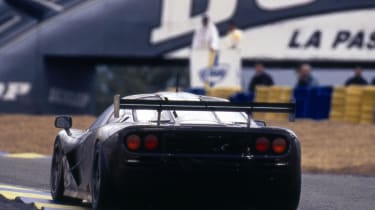 The story of McLaren’s debut win at the 1995 Le Mans remains one of the great legends of La Sarthe. Even now, some fifteen years after the event, the significance of what happened during those 24 hours remains truly remarkable.

Lest we forget, the F1 was the world’s most famous car in 1995. Everyone was buzzing with excitement, rapt by its power, price, pace and peerless quality. That would have been enough for most supercar manufacturers, but not McLaren. Having taken the decision to develop a racing version and supply it to privateer teams for the BPR GT1 Endurance series, an assault on Le Mans was inevitable.

Perhaps because chance of an overall victory against the Courage and Kremer prototypes was thought to be slim, McLaren’s support for the programme was deliberately low-key. Independent teams would run the cars, as they did in the BPR endurance series, but McLaren did co-ordinate a 24-hour test at Magny Cours in order to expose any weaknesses in the package and subsequently develop upgrades, which would then be made available to all the teams running F1s. 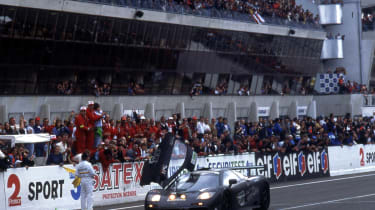 The car used for this test was owned by McLaren, but thanks to sponsorship from the Japanese cosmetic surgery practice, Ueno Clinic, sufficient budget was found to run the car at Le Mans too. A team was duly formed by a small nucleus of McLaren employees, who bolstered their ranks with experienced endurance racing engineers and known associates of McLaren.

One of the key members of the newly-formed Kokusai Kaihatsu Racing team was Graham Humphrys, then race engineer, now director of GT1 Design and a driving force behind Aston Martin’s Nürburgring racing efforts. Working alongside Paul Lanzante and Geoff Hazell (who ran the McLaren GTR programme), it was Humphrys who effectively engineered the No.59 car, making all the calls relating to its pre-race preparations and maintenance during the race itself.

Though the car’s progress appeared imperious from the spectator banking (I know, I was there), the Ueno Clinic F1 almost didn’t complete the first hour of the race. Humphrys explains: ‘We had a torrid time in the build-up to the race. JJ (Lehto) was phenomenally quick whenever he drove the car, but he’d bent a few wishbones by clouting the kerbs in qualifying. 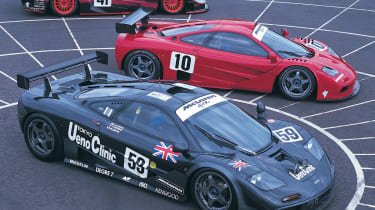 'Then he buzzed the motor, which meant we had to speak with the BMW guys, who were looking after the engines. If an engine exceeded 9000rpm they felt it was compromised, and that was their view of our engine. There was a spare, but I had to make the call to Ron Dennis to tell him we needed to have it. He listened intently, asked if anyone else had a similar need for the motor, and then gave us the okay to use it.

‘The engine swap meant we were working late into the night. Actually we were still working in the early hours of race day morning. At around 2am I can remember us scrabbling round the paddock trying to load the car onto a flat-bed transporter – we even enlisted a few drunk spectators to help us push it onto the truck – before taking to the aerodrome across the road from the main entrance for a shakedown test.