More details as the McLaren 12C GT Sprint, a track only supercar, is priced 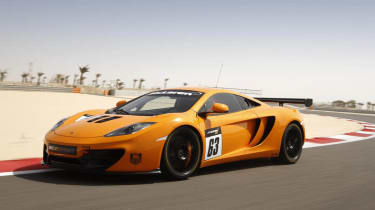 Designed and developed by McLaren’s GT racing division, the track-only GT Sprint has been created to bridge the gap between the standard 12C and the 12C GT3 racer, with the McLaren 12C Can Am track special a much higher cost alternative.

Engine upgrades include a bespoke oil system and cooling system, with a front radiator taken from the GT3 racer. The car has also received a modified ‘ProActive Chassis Control’ suspension system designed to suit its lowered ride height, sitting 40mm lower than the road-going 12C.

Other carryovers from the 12C GT3 car include the racer’s FIA-approved roll cage and digital dashboard. There’s also a composite racing seat, complete with six-point harness and HANS-device attachment. Air conditioning has been retained, despite the weight it adds, to ensure comfort levels aren’t binned. There’s also a fire extinguisher.

The addition of Pirelli slick tyres and carbon ceramic brakes - along with a track-focused braking system - further optimises the car for a circuit-orientated handling setup. Further changes include a revised aerodynamics package focused around a more aggressive front bumper, front wing louvres and a bonnet originating from the GT3 car.