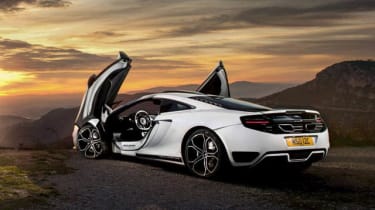 McLaren has revealed a new version of the 12C supercar. The 12C MSO exhibits some of the boldest options the McLaren Special Operations customisation range has to offer, and is certainly eye-catching.

The MSO 12C Concept gets a new bonnet, TVR Sagaris-esque front wing louvres, a new rear Airbrake spoiler (finished in unsubtle carbonfibre and baring the MSO name), an intricate front splitter and a carbon snorkel which takes more air to the twin-turbo 3.8-litre V8 engine. The smart diamond-cut wheels get titanium bolts, aiding with the reduction of unsprung weight.

Inside is where the MSO tweaks appear even less subtle. The 12C Concept gets a two-tone white and black steering wheel and a host of white trim on the centre console, while the instrument pod is finished in carbonfibre and now sports chintzy change-up lights.

There’s no word on how much these additions add to the McLaren 12C’s £176,000 price tag as standard, nor how much mass the carbonfibre makeover shaves from the supercar’s claimed 1434kg kerb weight. No performance tweaks have been advertised, suggesting the stock 12C’s 616bhp peak power, 3.1sec claimed 0-60 time and 207mph top speed remain unchanged.