The McLaren 12C's production run comes to an end as the 650S takes over; free upgrades for existing owners 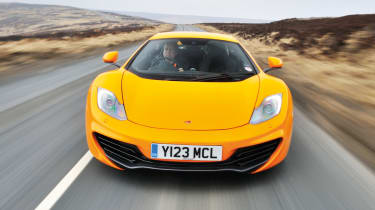 Production of the McLaren 12C has ended. It’s the widely predicted outcome of the introduction of the new 650S, which introduces new styling, extra power and chassis developments to the 12C platform.

While McLaren initially suggested orders of the 12C would be fulfilled alongside 650S production, the appeal of the former – which has been on sale for three years – was always destined to dwindle alongside the new car, the styling of which takes inspiration from the headline-grabbing P1 hybrid hypercar.

McLaren says the 650S has amassed a six-month order bank since its Geneva motor show unveil, and therefore it’s getting the full focus of the McLaren Production Centre’s capacity. ‘After three years of 12C production, this represents a natural evolution of our model line-up. I want to assure you that McLaren remains dedicated to customer satisfaction and that we care about the ownership experience of every car we’ve ever sold’ says an official release from McLaren CEO Mike Flewitt.

To help keep recent 12C buyers sweet, owners of the older car can get a free technology upgrade from June. This comprises new software for the active aero, which increases the repertoire of the rear air brake ‘spoiler’, allowing it to deploy during a throttle lift or when cresting a hill, on top of its typical role during heavy braking.  It can also lower when driving at speed in a straight line, acting like Formula 1’s ‘DRS’ drag reduction system.

There’s also an upgrade for the Android infotainment system. A reversing camera and DAB digital radio – debuted on the 650S – can be added as cost options to 12Cs.

Find out what it's like to live with a McLaren 12C