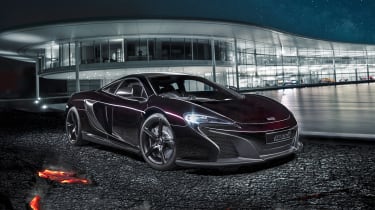 The McLaren 650S has been given the MSO treatment. MSO – McLaren Special Operations – is the McLaren Automotive ‘bespoke division’, the team that offers new styling parts for the British company’s supercars, as well as crafting one-off creations such as the loopy McLaren X-1.

The MSO 650S isn’t as mad as that car, instead benefiting from a selection of styling tweaks. Most of these are made from satin-finished carbonfibre, with the front splitter, air intakes, airbrake and engine bay all getting a carbon makeover. The more aggressive rear diffuser and side blades are also made of carbon. The paint is called ‘Agrigan Black’ and incorporates a red metallic flake effect, which apparently changes in appearance depending on light levels.

Inside, the MSO concept benefits from a ‘one-off design showcase’. This includes carbon fixed-back racing seats, finished in black leather and sitting lower than the 650s regular chairs. They are also 15kg lighter. Satin carbonfibre also adorns various parts of the cockpit.

While the car is intended as a design study, and one which is about to embark on a tour of China, elements of it can be applied to the 650S now, namely the side blades and rear diffuser. They can be fitted for a respective £5114 and £7245, and will also fit the now discontinued McLaren 12C, too. MSO will monitor reaction to its 650S before deciding on which other elements make production.

And no, we’ve no idea why the press shots display the car in post-apocalyptic Woking either…