We take a look at the Tizi n’Tichka pass, a fantastic road with true adventure potential in Morocco. Read the full story here 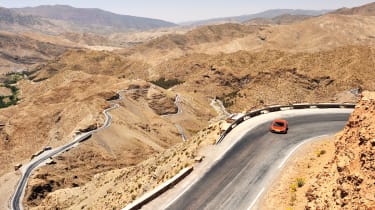 You might have looked at the location of this drive and thought, ‘that’s as attainable as a Veyron on finance’. Africa seems a bit remote, I know, but don’t dismiss it. I reckon you could do it with a week’s holiday: a couple of days to drive to the south of Spain, an hour’s ferry journey from Tarifa to Tangier, a day to Marrakech, a day driving over the Atlas Mountains then three days back to Blighty. It would be epic, but worth it.

Start point: 31.58526, -7.88406 (south-east of Marrakech)The route: the N9 from Marrakech to OuarzazateDistance: 115 milesTime: 3 hoursGreat for: anything you’ve managed to get through Moroccan customs

The Tizi n’Tichka – the N9 south from Marrakech over the High Atlas – is spectacular long before you reach the squiggling stretch near the summit (the bit in the picture here). There’s much more vegetation for the first part and the mountains are only a hazy outline, when you can see them at all, but there are always corners to enjoy and scenery to gawp at. Once you’re over the summit you can tell that you’re heading towards the Sahara as the land gradually becomes more arid and expansive.

If you choose to follow the route that Dean Smith and I did in the McLaren 12C in 2012, you’ll now need to head towards Agadir to the west on the crazy-long straights of the N10, eventually looking out for the narrower and much more dangerous Tizi n’Test pass back over the Atlas to Marrakech. Or you could simply turn round and drive back along the Tichka again.

Fuel should be available in Ouarzazate at the southern end of the Tichka, and again along the N10, but it’s best to start each pass with a full tank. It would be wise to check your tyres are healthy too, including the spare. Be reassured, however, that the Moroccans are a friendly bunch and, amazingly, there is also excellent mobile phone reception at even the remotest parts of the route. As for what car to take… well, if you can’t lay your hands on a 12C, then I reckon the road surface, particularly on the Test, would suit an early Impreza.

Marrakech is the place to be. We stayed at La Maison des Oliviers (www.lamaison-desoliviers.com), which is a couple of miles south of the hustle and bustle of the city, just off the P2017 (down a rather rough track). It was genuinely lovely, had parking, Wi-Fi and felt like a steal at €54 a night B&B.

Police and goats in trees. The former may well try to extort money from you for various reasons. Generally, after a bit of haggling, the price will fall to an acceptable pittance and it’s easiest just to pay up. The goats will be in Argan trees, eating the leaves. Just to clarify, the police won’t be in trees. That would be weird.

The McLaren 12C supercar deserves a tyre that maximises the car’s performance: the MICHELIN Pilot Super Sport. And owners who enjoy the challenge of trackday driving might also consider the MICHELIN Pilot Sport Cup 2: a tyre optimised for ultimate track performance, but which remains street-legal. Both tyre models incorporate technologies from endurance racing – something that Michelin knows a thing or two about having chalked–up 17 consecutive victories at Le Mans! PSCUP2 delivers 50% more laps and is faster than its acclaimed predecessor the Pilot Sport Cup.