The circuit-only McLaren 12C GT Can-Am could be the greatest track toy on sale. Review here 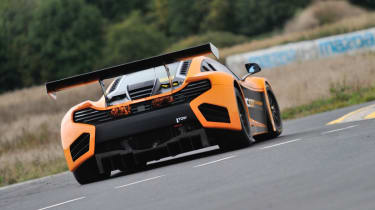 The McLaren 12C Can-Am Edition, a barmy but brilliant semi race car. Not road legal, but shorn of motorsport regulations, just 30 of these £375,000 machines will be built as ‘the ultimate track car’. We’ve tested it at Blyton Park circuit, a fabulously noise-tolerant track in the north of England.

An evolution of the McLaren 12C GT3 racecar, its power is up over 100bhp to 621bhp while there is 30 per cent more downforce, changes allowed due to the Can-Am’s lack of racing restrictions. The same carbonfibre monocoque chassis as the 12C road car lies beneath, and with all the upgrades, the total dry weight comes in at a claimed 1200kg (1334kg as tested with a full tank of fuel).

A new aerodynamic package includes a front splitter, dive planes, and humongous rear wing all crafted from carbonfibre. The extra power comes from a revised 3.8-litre twin-turbo V8, and with 5bhp more than a road going 12C, it’s the most powerful iteration of McLaren’s baby supercar yet. Its 0-60 time will be quicker, though its top speed is over 30mph lower. Not that it really matters on most tracks...

You know you’re about to drive something serious when a man in an immaculate McLaren-branded shirt has to brief you on what all the buttons on the steering wheel actually do. There are traction control and ABS settings, various engine maps, a pit limiter… It all washes over me, to be honest. I’m more concerned that the ‘wheel’ doesn’t have a top or bottom. Those of us of a certain age would call it Knight Rider-spec.

The Can-Am is running the hard-compound race tyres from the Blancpain Endurance Series that take an age to get up to operating temperature and are usually slipped out of tyre-warmers. Today they’ve been sitting on cold concrete in an old hangar for four hours. So it’s with much relief that McLaren factory GT ace Rob Bell is on hand to shake the car down and get the tyres hot. It takes about 12 laps. Yikes. Then he jumps out, says the traction and ABS settings are perfect (I wasn’t going to touch them anyway) and offers just one piece of advice: ‘Brake really hard into the corners, otherwise it’ll just understeer.’ Then the flimsy door slams down and it’s just me and the Can-Am.

The clutch is a bit of a pig to judge and I judder onto the track with revs flaring and waning, but never quite dying completely. Then I decide to give it the full beans along the short straight to Jochen. I’m not sure why, but as it turns out the tyres take the torque and the 12C fires through second and deep into third in a blink. The brakes require massive pressure but the ABS is so reassuring that I can jump on them with no fear of locking up. Then I feel pathetically cowardly as the Can-Am eases through Jochen and The Ump at about 20 per cent of its potential.

Incredibly, that’s the last time the Can-Am feels too much for me. I’d love to say it was an animal and that I tamed it… but it’s just so easy to drive hard. You need to get your mind around the braking capability and the forces required to maximise it, but once you do, the Can-Am just sucks you in, encouraging you to really lean on the front end, to take risks on the throttle and to let the traction control help. Pretty soon you find yourself driving absolutely at your limits and catching glimpses of the car’s limits, too.

Like the 12C road car, the front inside wheel hops through Bunga-Bunga and the engine’s sheer reach blows your mind, but the Can-Am can turn and brake like no road car and that ability defines its lap. It’s quite astounding to be part of a car that can obliterate a circuit with such force and precision, and to feel the less-loaded rear end slide into corners and hold its angle as you feed in the power. To say that the Can-Am makes you feel heroic is an understatement. Ferocious, predictable, composed, agile, mind-scrambling and just joyously exciting, it’s everything you hope it will be and then a little bit more. It rips around Blyton in 55.1sec of flame-splitting madness – nearly eight seconds quicker than the already rapid McLaren 12C road car.

The 12C GT Can-Am is closest in spirit to track-only supercars like the Ferrari 599XX, Pagani Zonda R and Lamborghini Sesto Elemento. Unlike those cars, though, it doesn’t command a million-pound-plus price tag. The fact its spec outstrips the McLaren12C GT3 racer is also exceedingly appealing.

I’ll never forget my laps in the Can-Am - the intensity of the acceleration, the astonishing braking and the sheer approachability of it once the initial intimidation fades. Not only that, but it also challenges you to reappraise what’s dynamically possible and leaves you physically exhausted – and that’s a whole new type of fun. If money is no object then you’ll find few greater thrills.