The ultimate track-only iteration of the P1 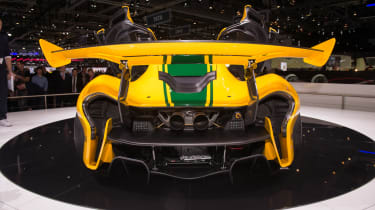 Why, you might well ask, is a limited production trackday car costing the best part of £2million of such relevance to the rest of us?

The short answer is that it isn’t. But as lovers of anything with four wheels and a half-decent power-to-weight ratio, when McLaren invests the sum of its colossal expertise into a single machine, intense curiosity and excitement quickly take root. That the car will go up against the Ferrari FXX K – on the spec sheets, if not in reality – only adds to the spectacle.

The P1 GTR is the P1’s wild cousin. Let loose from the regulations that govern road cars, it will be the fastest, most technologically advanced machine to leave McLaren outside of the firm’s Formula 1 outfit.

The big numbers are very big indeed. GTR owners will have 986bhp at their disposal; downforce is up to 660kg at 150mph; and cornering forces should be greater than the road car’s already absurd 2G. 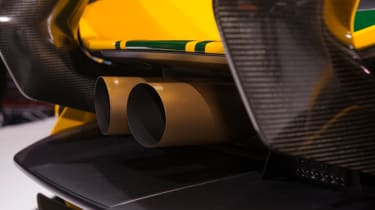 As Henry Catchpole has already mentioned, though, it’s the small numbers – the marginal gains – that will add up to make the McLaren GTR an experience above and beyond the mightily capable car on which it’s based. This is what we know so far.

The GTR’s powertrain is monumental. As in the road-going P1, McLaren’s familiar 3799cc ‘M838T’ twinturbo V8 will be paired with an electric motor. Both elements, which combined form McLaren’s memorably named Instant Power Assist System, have been revised to increase overall power from 903 to 986bhp, however.

Output from the V8, which runs 2.4bar of boost in standard trim, has risen from 727 to 789bhp, while the torque-rich electric motor now generates 197bhp, up from 177bhp.

These changes are the result of software remapping, the fitment of motorsport ignition coils alongside a revised ignition system, and the use of race-specification fuel. The cylinder head gasket has also been replaced to allow for even higher combustion pressures.

Exhaust gases now escape the car via two large outlets wrought of Inconel, a superalloy renowned for its suitability for extreme environments (which, incidentally, includes the Mazda RX-7’s turbocharger), and titanium alloy. The system saves 6.5kg over the already featherweight plumbing in the road car.

We have a full gallery of new images of the P1 GTR from the Geneva Motor Show below. 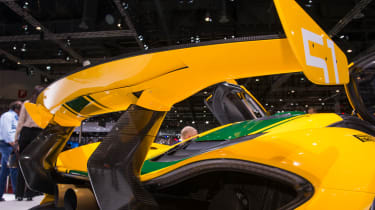 McLaren wouldn’t divulge to evo the finer details of the P1 GTR’s transmission; suffice it to say that the seven-speed dual-clutch system is based on the Graziano unit in the road car. It has been uprated to cope with yet more power and torque, including Formula-1-specification gear coatings and the use of race-specification oil. All of the car’s 986bhp is sent to the rear wheels.

It is possible that the transmission’s seven ratios have been shortened from the P1 to allow for faster acceleration. The compromise would be a lower top speed.

The GTR doesn’t just look wider and more pugnacious than the road-going P1, it actually is. McLaren has extended the front track by a substantial 80mm, making it just 27mm narrower than the full-blown 650S GT3, although the real headline concerns ride-height. The GTR sits 50mm lower to the ground than the normal P1 – it is essentially touching the tarmac at higher speeds.

Elsewhere, the P1’s ultra-lightweight carbonfibre monocoque chassis remains, and in doing so negates the need for an FIA-spec roll-cage.