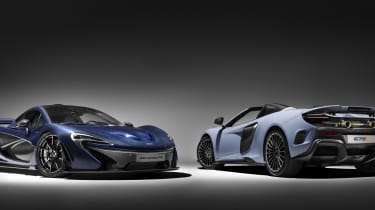 McLaren has revealed its exhibits for the 2016 Geneva motor show, with the full range of Sports Series, Super Series and Ultimate Series models on display.

The show will also celebrate two of McLaren’s most desirable models, with a McLaren Special Operations tribute to the sold-out P1 and 675LT Spider – the latter making its first public appearance.

The MSO Bespoke division will present a P1 displaying a full hand-laid carbonfibre body conversion, an option made available to customers earlier in the year.

A ‘Lio Blue’ tinted lacquer leaves the carbonfibre weave visible, and contrasts the clear lacquer over other carbonfibre components such as the door vents, front and rear aero elements, the mirrors and the underside of the rear wing.

The wheels have been left gloss black, while the interior features a full retrim in carbon black Alcantara, with contrasting blue stitching. A 24-carat gold exhaust heatshield references the gold engine insulation of McLaren’s most famous supercar, the F1. 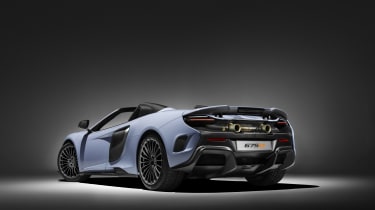 MSO has also worked its magic on the 675LT Spider, though with all 500 examples already spoken for, the Geneva car is little more than a shop window for MSO’s abilities.

The show car is presented in a coat of Ceramic Grey paintwork, with extra carbonfibre elements – including the satin carbonfibre retractable hardtop, which shaves 1kg from the weight of a standard top.

The car’s ‘Longtail’ airbrake – from which the LT takes its name – is painted in body colour on the upper surface, but like the MSO P1 has clear finish to the underside of the wing. The front bumper end plates, side skirts, side intakes and rear bumper also feature a natural carbonfibre finish.

Inside there’s a pair of Alcantara-trimmed seats, with ‘Xenon Yellow’ stitching and, as with the P1, a 24-carat gold exhaust heatshield.

The 2016 Geneva motor show opens to the press on March 1, and evo will be there to bring you the latest news and images. Keep up to speed with Geneva on our show hub page.