As they’ve gone their own way with the chassis and aerodynamic systems of the P1, so too the drivetrain could only be a new age McLaren. The basic engine architecture is the same as that of the 650S, a 3.8-litre twin turbocharged V8, but it is radically strengthened with a new casting to incorporate the electric motor. New turbos run 2.4-bar of boost (a 650S runs 2.2-Bar) and the internal combustion element of the P1 generates a startling 727bhp at 7300rpm and 531lb ft at 4000rpm. The single electric motor produces 176bhp for a total of 903bhp and 664lb ft. In E-mode the P1 has a range of around 6-miles.

The engine drives through a 7-speed dual clutch transmission. The motor assists the engine with ‘torque fill’ to cover for those moments when the turbos are off boost or spooling up to maximum pressure and under all out acceleration. In terms of power output the P1 beats the heavier 918 Spyder by 29bhp in outright power but it does lag some way behind Porsche’s 922lb ft. The LaFerrari eats them both with 50bhp and 715lb ft… But aside from bar room bragging rights these slight differences matter little. The P1 is madly, wickedly fast. 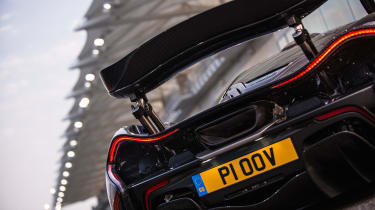 It’s also unique in character and sound. Perhaps it lacks the tight precision of the 918’s screaming V8 or the savage sumptuousness of LaFerrari’s V12 but there’s something deeply thrilling about the P1’s industrial, brutalist approach. It snorts and wheezes at low speeds like an F40 then roars a deep baritone howl when it’s fully-lit. It’s a furious, almost scary experience and an unexpectedly wicked side to the sometimes uptight McLaren approach. We approve.

The 7-speed ‘box is incredibly fast as you’d expect and feels even crisper than the 650S application thanks once again to that electrical torque-fill capability. In terms of absolute response the P1 has to give best to the 918 and its rippling torque thanks to its greater electrical capacity and normally aspirated engine. The big-banger LaFerrari also just shades it in this area. On track in particular the electric motor struggles to hide the P1’s big boost, high specific output delivery. However, judged in isolation it offers incredible almost lag-free bite.