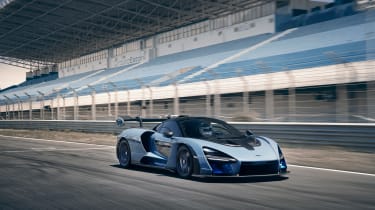 The M840TR version of McLaren’s V8 has been comprehensively revised over the engine in the 720 S for this, its most powerful iteration yet. Having passed through the roof-mounted snorkel intake, the ingested air then enters a new carbon fibre intake plenum that helps enable an even better throttle response.

New cams and pistons, two instead of one fuel pumps and additional sensors ensure the V8 is capable of its increased outputs, which now stand at 789bhp at 7,250rpm and 590lb ft of torque from 5,500-6,700rpm. The spent gases leave via an inconel and titanium exhaust that exits on the top of the rear deck, with careful management of the airflow to ensure that it does not interrupt the workings of the rear wing. The exhaust is valved for the UK and many other markets, with the lower of the three pipes taking precedence at low revs and loads; in certain markets this additional silencer and pipe is removed, whereupon there are just two pipes exiting in the exhaust surround. 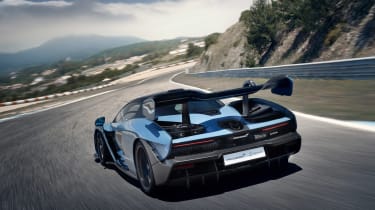 Like all other McLarens, the Senna uses a twin-clutch gearbox with manual control via paddles behind the steering wheel. In Sport mode the ignition is cut for the change of gear, but while it may seem impossible to get a quicker swapping of cogs, in Track and Race settings an ‘Inertia Push’ technology means there is virtually no interruption at all during the gear changing process.