The four-door coupe is set to receive the hybrid treatment, going up against the 680bhp Porsche Panamera Turbo S E-Hybrid 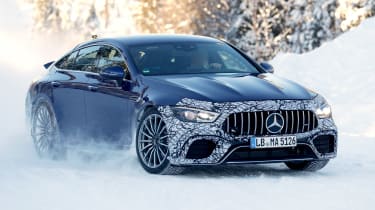 Unlike the last AMG to wear the 73 name, this iteration of the AMG GT 4-Door is unlikely to come with a 7.3-litre power plant, but instead, a handful of hybrid componentry. Rumoured pure electric capabilities would put it directly inline with Stuttgart’s efforts, and make it Affalterbach’s flagship model.

Spotted testing in Scandinavia, this test mule is based on the 63 S currently on sale. Though almost entirely free of disguise, very little appears to have changed in the way of design.

With a reveal not expected until later this year, details are scarce, but these new spy images have reignited conversation about AMG’s very first plug-in hybrid. A clip featured in the brand’s 2019 overview film previewed a GT 4-Door mule accelerating silently, reinforcing the rumours of an upcoming plug-in hybrid variant.

Though a hybrid iteration is still yet to surface, 2017’s concept came with the current model’s 4-litre twin-turbocharged V8 mated to an electric motor, for an output of around 800bhp. Should the GT73 take on the specs of the concept, it would boast a healthy 120bhp advantage over its closest rival, the Panamera Turbo S E-Hybrid, taking it closer to the all-electric Taycan Turbo S. 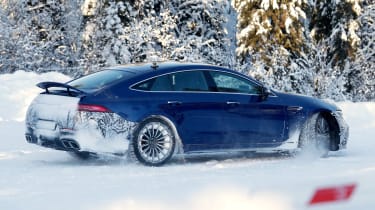 With electric motors renowned for their instant torque and gap-filling abilities, performance will likely be brisk. The pure-combustion, 630bhp 63 S can sprint from 0 to 62mph in only 3.2sec and on to a 196mph, making a sub-3 second time likely for the uprated PHEV.