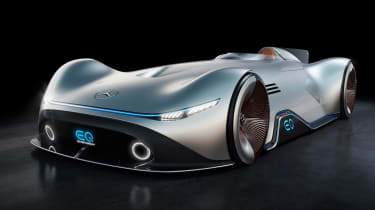 Mercedes-Benz arrived at Pebble Beach with this retro-inspired concept. Called the EQ Silver Arrow, it combines styling cues from the marque’s illustrious racing past with the kind of electric drivetrain that will play an important role in the company’s future.

The car’s styling is directly influenced by Mercedes racers of the 1930s, ’40s and ’50s – from the aluminium bodywork-aping Alubeam Silver paintwork, through to the single-seat layout.

> Click here for more of the cars from Pebble Beach

Within the compact cockpit, accessible by folding a partial cover forward,  is a similar mix of new and old, with traditional materials rubbing shoulders with futuristic elements. So there’s saddle-brown leather covering the seat and steering wheel, and aluminium highlights and a walnut floor, but these are offset by a very modern head-up display projected onto the slim wraparound weatherscreen.

Under the carbonfibre skin is an electric drivetrain producing 739bhp. It’s fed by an 80kWh battery enabling a range of over 248 miles according to simulations based on the new WLTP testing procedure.

But this is no pointless concept, as it has been designed to inform the future of Mercedes’ forthcoming EQ range in its detailing, surfacing and aerodynamic focus. The first model in the production all-electric EQ range will be revealed later this year, and although we have already seen concepts of what to expect in the near future, this one is a look further down the road at where Mercedes might take its distant future, whilst still drawing on its past.