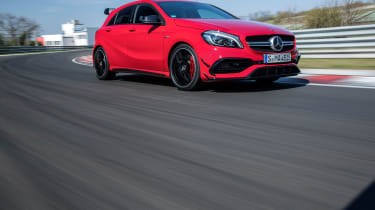 It’s hard not to be impressed with the power AMG’s engineers have managed to extract from a mere 2.0-litres of capacity, even with turbocharging. 376bhp is a lot of power by anyone’s standards, let alone that of similarly-sized cars, and with a seven-speed dual-clutch transmission and docile responses at low speeds it’s as easy to drive as an entry-level Mercedes A180. Sending power through all four wheels as part of a 4MATIC all-wheel drive system, the A45’s reserves of traction are never in doubt. 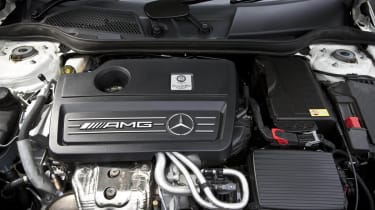 Importantly, it’s also a ‘proper’ AMG. Just like other models so-badged, the A45’s engine is hand-assembled by one person from start to finish. Such a procedure was always a highlight of older AMGs, but it’s somehow more impressive still with the A45, given the comparably huge numbers the smaller car sells in.

The A45’s headline power output is developed at 6000rpm, with 350lb ft of torque on offer on a 2250-5000rpm plateau. Some may point out that Mitsubishi once produced Lancer Evolutions with greater specific outputs, but realistically the cars are beyond comparison - the AMG not only produces impressive power, but does so with a three-year warranty, 12,500-mile service intervals, and combined economy of 40.9mpg - figures in the 30s are entirely realistic.