Completely different from the last A45, in that it’s now genuinely fun to drive rather than simply being fast 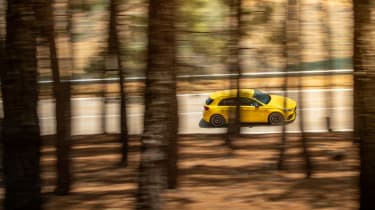 This is perhaps the greatest departure from the old A45. Once a flat-footed, firm-riding hatch that placed grip over finesse, the latest A45 S has enviable all-round abilities, capable and composed where you need it but also enjoyable and interactive where you want it.

There is, obviously, plenty of ability. Grip levels are remarkable, from the moment the tyres bite on turn-in to the moment you wind off steering input and fire off up the next straight. With the driver mode in Sport or Sport+, which have more positive weighting than in Comfort, the A45 responds in such a way that you can confidently pick apart a corner as soon as you’ve turned in. There’s enough feedback, but importantly the predictability to make inputs intuitive.

Mid-corner the A45 S leans hard on its outer tyres, but does so evenly – and there’s enough body control that the inner pair remain resolutely planted too. Find you’ve gone in too hot – it’s unlikely given the powerful brakes and keen front end, but possible – and a lift of the throttle quickly neutralises the car.

Get on the power early and you don’t wash wide as expected, but power out at more or less the angle you’re pointing the steering, the rear end feeding you around to lock the car to your chosen radius. Really lean into the power out of a tight turn and you’ll get an additional few degrees of rotation, easily caught by relaxing some lock. 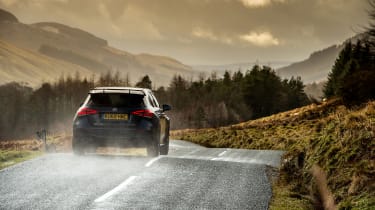 The ride quality is good too. Firm, sure, but you’d expect that of a car of this performance. Importantly though it’s not uncomfortable, and is probably better than any other A-class thanks to the clever damping. Knocking the car into one of its sportier modes doesn’t notably harm things either, even on bumpy UK roads.

The upshot is that the A45 S isn’t just fast, but also a real driver’s car. It doesn’t need to be driven flat out to appreciate its qualities, but ask for more and the car will deliver without a second thought – all while keeping you, the driver, in the loop.