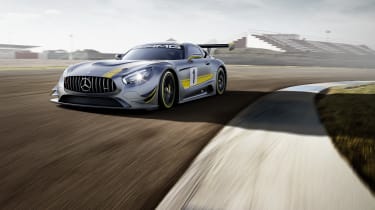 The long rumoured Mercedes-AMG GT3 has now finally become a reality. Pegged to make its first public debut at the Geneva Motor Show, the new car sees the return of the incredible 6.2-litre V8 from the SLS AMG GT3.

Mercedes has developed the car to comply with FIA GT3 rules and intends to start shipping the new AMG GT3 to customer race teams by the end of 2015.

The car features a massive diffuser and rear wing, with a set of dive planes at the front for added aero. A widened body combined with larger air intakes also signify the car’s GT3 credentials. Press pictures show side exit exhausts, which is definitely no bad thing when it comes to the 6.2-litre V8. 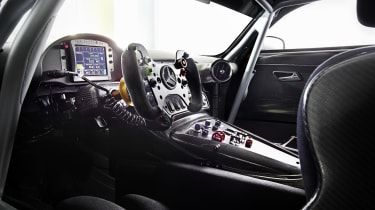 Mated to the V8 is a six speed sequential racing gearbox. This is mounted in a transaxle setup on the rear axle to help with weight distribution. Suspension comes in the form of aluminium double-wishbones all round.

Interestingly, the aluminium space frame from the road going version of the car makes its way over to the GT3 racer. This is then combined with a carbon-fibre seat pan and steel roll cage for further safety enhancements. Carbon-fibre has been used extensively throughout the AMG GT3. Virtually every panel, from the engine cover to diffuser and boot lid use it.

As we mentioned earlier, the Mercedes-AMG GT3 will be appearing at the Geneva Motor Show. Expect more on it then.