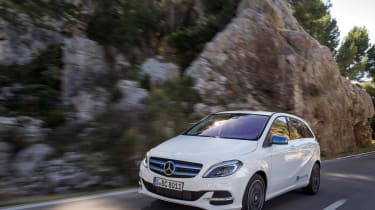 Although Mercedes-Benz likes to align all of its compact cars under the New Generation Compact Cars banner, it would be foolish to expect the B-class to drive just like its brethren, the A-class and CLA; engines aside, it's completely different from behind the wheel and, so long as you're not expecting class-leading agility or chassis feedback, it's perfectly fine.

Yes, that is damning it with faint praise, as it's not a car to get excited about driving. All versions, even the AMG Line models with their lower ride height, major on comfort and refinement, but even so there's a distinct boom in the cabin at speed when the car is empty. However, unless you're in a hurry, engine noise is kept at bay and overall it's a great place to while away many a motorway mile. 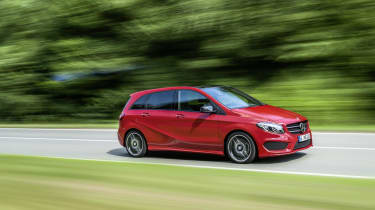 But there's little encouragement to take a detour for the sake of it. The electric power steering is slow (even in the AMG Line car with its variable ratio rack) and there's no clue as to how much grip is available. The pronounced body roll will dissuade you from finding out for yourself.

In fairness, it's a stable and safe set-up with loads of active safety built in, including interaction between the power steering and the ESP stability control, allowing modest levels of automatic steering correction in certain circumstances - such as crosswinds or when braking heavily on surfaces with different grip levels on each side of the car. There's also Torque Vectoring Brake to reduce the tendency to oversteer. As we said, this isn't a car you'd choose to drive for the sake of driving.