Sitting below the range-topping C63, Mercedes-AMG’s next C43 has been spotted testing ahead of its reveal 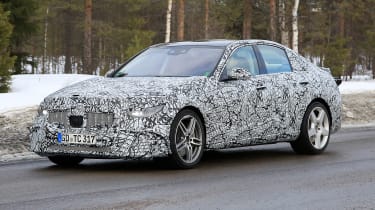 Launched in early 2016 as an entry-level AMG C-class, the current Mercedes-AMG C43 boasts a turbocharged 3-litre V6, sending power to all four wheels. It seems this is about to change, however, as our spy photographers have spotted the next iteration cold weather testing with a new engine.

Visually, this test mule doesn’t give much away, with a heavy layer of camouflage disguising any design tweaks. What can be seen are a set of high-performance drilled (front) brakes sitting behind its odd set of wheels, as well as a quad-tipped exhaust system, and what appears to be the performance division’s Panamericana grille, nestled behind a disguise.

The real interest lies under the skin, with photographers noting a four-pot sound. Likely ditching the current 3-litre six-cylinder for the same 2-litre four-pot as in the new A45, the next C43 will mark the beginning of AMG’s switch to four-pot power.

Power figures are yet to be revealed, but in order to leave room for the range-topping C63, and 429bhp E53, expect it to sit at around the 400bhp mark. With 385bhp, the current model sprints from standstill to 62mph in 4.7sec, and on to a top speed of 155mph. With its marginal increase in power, expect the new model to shave a couple of tenths off that acceleration time. 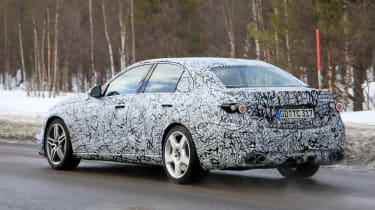 The possibility of a performance mild-hybrid C53 isn't out of the question, as Mercedes-Benz trademarked the name in mid-2018. Though all existing 53 models have come equipped with six-cylinder power plants, we wouldn’t rule out the possibility of a hybridised four-pot.

Pricing and a launch date are both yet to be disclosed, but expect the new C43 to be priced marginally higher than its current £50,010 figure.