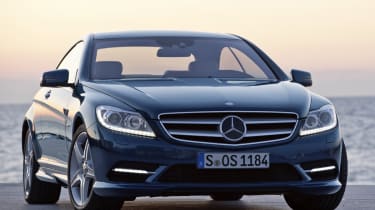 The new Mercedes-Benz CL has been revealed. While it’s far from the company’s best selling model – circa 200 are sold annually in the UK – it’s a pretty effective flagship to the range, boasting power and presence aplenty and an ever-reliable taster of future mainstream tech. The ‘90s CL was the first car to feature ESP, Merc proudly claims, equipment that’s close to becoming a requirement for EU sales… This is a facelift rather than an all-new model, hence it’s not been called the S-Class coupe for now. Exterior changes are minmal, some tweaked lights and grilles the subtle tell-tales, with all the big developments under the skin. The biggest is a new engine for the CL500. It debuts a 4.7-litre twin-turbo V8, which boasts 430bhp and 516lb ft alongside a claimed 30mpg and – crucially – 224g/km of carbon emissions, enough to ensure it slides into £235-a-year tax band K. It’s a hugely impressive figure for a huge, V8 luxury coupe, pumping out the same CO2 levels as a Ford Focus ST. If you aren’t a fan of the green talk, then fear not, as the monster V12-engined CL600 can still be ordered, with a twin-turbo 5.5-litre unit producing 510bhp and 612lb ft while drinking fuel at the far more luxurious rate of 20mpg. You’ll be paying full-fat tax, too. New technology comes in the shape of Active Lane Keeping Assist and Active Blind Spot Assist. Both do exactly what you’d expect, but to a far more nannying level than similar systems from rival manufactuers: ignore the bongs, beeps and flashes that come from lane wandering or blind-spot ignorance and the ESP will step in and brake the necessary wheels to prevent an accident, or at least try its hardest to. There’s a host of other suitably complex electrickery, including tech that combats the effects of high-speed crosswinds. Sales begin in September, with prices announced closer to that time, though expect the CL500 to kick things off at around £90,000. An AMG version (starring the official Merc tuner’s new engine) should be here in the not-too-distant future too.

VIDEO: The Merc CL65 takes on Bentley and Aston