With soaring fuel costs, the Renaultsport Megane dCi is seriously tempting, but can it rival the Focus ST away from the pumps? 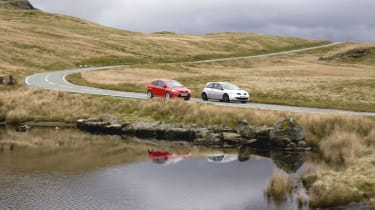 The bikers are looking puzzled. Sat astride their race replicas at a fuel station in Betws-y-Coed, they’ve just watched me fill a Renaultsport hot hatch from the black pump. Now they’re looking even more confused as I thumb the starter button and the engine cackles into life, settling into a proper diesel chug.

Their expressions beg an explanation, but I’m in search of breakfast. Had I stayed, I’d have informed them that this is not some sort of Frankenstein creation, but the latest product of Renaultsport’s talented engineering department, who have mated the hot petrol Mégane’s superb underpinnings to a 173bhp 2-litre turbodiesel engine.

Renault announced the resulting Mégane dCi 175 with a fanfare at the Geneva motor show last year, but it arrived recently on British shores with barely a toot. That’s a shame, because on paper this could well be the answer to many a hot hatch fan’s prayer – a car that maintains sporting credibility, but promises 40mpg and keeps the taxman off your back.

OK, so it doesn’t get the slippy diff of the petrol R26, but if you opt for the £400 Cup Chassis (£700 if you add the 18in alloys, as fitted to this specimen), the rear spring rates are tightened by another 37 per cent, the dampers are retuned and the body is dropped 10mm. Hardly slammed to the deck, but it certainly sits more purposefully on the road than the rival that’s waiting for it today.

Ford has made plenty of noise about the revised Focus. Seems a bit overboard for what amounts to little more than a fresh face and a bit of added glitz and glam. Without a suitably potent oil-burner, Ford has stuck to proven petrol power for the latest ST: the familiar 222bhp Volvo-sourced five-cylinder turbo unit. Nothing wrong with that, because despite its everyman image the rorty ST remains a class act – and provides a known benchmark against which we can judge the Mégane dCi.

Before we get started there are a couple of headline figures you should be aware of. Torque favours the Renault (265lb ft plays 236lb ft). No surprise there, but you might raise an eyebrow when you learn that the Ford’s twist arrives 400rpm lower at a mere 1600rpm. The ST is also lighter by almost 80kg – dropping an oil-burner into the French car’s nose has seen weight spike by 125kg over the petrol Cup.

You don’t feel it though. West of Llangollen, the A5 is chock-full of testing curves but not once during the early-morning strop to Snowdonia did the Mégane’s eager front end slip into understeer. In fact I was beginning to think a limited-slip diff had found its way into this car, so tenaciously was it holding its line even through tightening bends.

Parked up next to each other, both cars carry a few extra pounds of visual weight. The Mégane has its plump rear end, while the taller Focus could never be described as svelte. Its new front end is cleaner and less bulky, but the ST still lacks the confidence and presence of the old RS and it can’t match the mean, purposeful stance of the French car. Renault also deserves credit for resisting the temptation to slap dCi badges all over the Mégane – there’s not a single one on display until we lift the bonnet.

Given the dull, plastic-shrouded sight that greets us, we decide to forgo a detailed visual inspection in favour of a practical demonstration. Slam the bonnet, open the door and drop into a leather-wrapped Recaro. The firmly padded chair isn’t quite as well shaped as the Focus’s, but the bigger problem is the Mégane’s cabin ambience. ‘Looks like they almost couldn’t be bothered’ is how road tester Roger Green puts it. He’s right. A bit of red stitching around the top of the steering wheel is not enough to stir the soul.

And as the bikers found out earlier, thumbing the starter button (the Renault has a full keyless system) doesn’t exactly create a noise that would have Jay Kay reaching for his sampling decks. The tune isn’t any more enticing on the move, either. If you fold the rear seats down you do get a bit of exhaust rasp, but the fact you have to go to these lengths to seek out any aural excitement highlights just how dull is the note that underpins the engine’s delivery. But let’s not be too dismissive – the 2-litre is impressively quiet under full-bore acceleration, revs smoothly and is very well mannered.

Renaultsport has obviously spent time tuning the engine management. It’s not just that the Mégane supplies gratifying grunt throughout the mid-range, but also the linearity of its acceleration and the almost complete absence of lag. Upon trying the car earlier, John Barker commented, ‘I haven’t driven a diesel with better throttle response. And you can happily heel and toe because there’s no dead patch in the pedal travel.’

The duck-and-dive roads of our test route should give us plenty of opportunity to enjoy this trait to the full, but two facts conspire against it. Firstly the gearshift, while quick, is hampered by a long and slightly flexible lever, and secondly the tall gearing and broad torque-band mean you rarely need to swap between ratios anyway – fourth gear is suitable for most situations.

What’s really surprising, though, is how quickly the Renault is covering ground. The diesel’s silky delivery means speed creeps up on you, making it easy to find yourself barrelling into corners a smidge faster than you thought. The excess is easily wiped away by the brakes, which prove consistently firmer underfoot than the Ford’s, and the Mégane is also able to carry greater apex speed than its rival. There’s an argument that says the hefty diesel engine helps glue the front rubber to the road, but dynamically it should also unbalance the car, making the back end more skittish. Not so. The Renault’s tail remains obediently planted and its stiff suspension resists roll better than the Ford’s, delivering quicker direction changes and tighter body control. Yumps, lumps and bumps are quickly contained, the suspension always remaining in sync with the road’s surface. The Mégane knuckles into the tarmac, inspiring confidence despite electric power steering that, although well weighted, never quite delivers the detail we’d like.

God, it’s capable this car. Entertaining, too. I reckon I’m having just as much fun as Rog, who’s leading the way in the ST. He’s not getting away much either, and from the amount of lean the Focus is exhibiting through corners, he’s certainly not sparing the horses. There are plenty of them, too – the Focus’s stable has 49 more to call upon. This made a decisive difference when we figured the two cars at Millbrook earlier – the ST pulled out a 1.5sec advantage to 60mph and was close to 7sec ahead at 100mph. It’s a rapid car, with a power- band literally twice as wide as the Mégane’s.

Out here, though, both hatches fall into a similar natural rhythm – they’re happiest at around seven-tenths, using the engine’s torque and taking a smooth line down the road. Up the pace and it’s the Focus that starts to get slightly more ragged. The brakes go softer sooner, the usually slick gearbox becomes mushy, and the Ford scrabbles where the Renault slices. Through tight bends it often needs a lift off the power to tuck the nose back in, plus more sympathetic use of the throttle to prevent an inside wheel spinning or the nose walking itself across the road. In handling terms it’s advantage Mégane.

But that’s not to say the ST is poorly sorted. Ford set out to build a more mature hot hatch and that’s exactly what the ST is. The longer-travel suspension delivers a more compliant ride more of the time, while the adoption of a five-cylinder turbocharged engine was no accident either. Its lazy delivery suits the Focus perfectly, helping to make the ST a friendly, lusty, big-hearted car. Sounds great, too, the hollow gargle helping to inject some real personality into the mix.

Shame about the cabin, though. JB likened the driving position to sitting on a bar stool, and although my knowledge of pub furniture obviously isn’t as extensive as his, you do find yourself forever trying to lower the seat. The Recaro clamps you in place well, though, and the general ambience inside the ST is more special and sporty than in the Mégane, despite the spangly Southend-seafront carbonfibre.

Now, we don’t normally talk costs, but we’ll make an exception here. Blasting across Wales, the Focus demanded a gallon of unleaded every 22.2 miles; the Mégane stretched that to 32.4. On the cruise up there and back, the results were Focus 27.5mpg, Mégane 39.1. Even though diesel is around 10 pence per litre more at the moment, over 12,000 miles the Mégane would save you over £500. And that’s without thinking about its lower road tax band (another £40 saved), environmental impact (172g/km plays 224g/km) and insurance.

But although cash counts, charisma counts for more. The Focus ST may not be the sharpest hatch, but it’s big on character and ability, the deep-chested engine and rugby-player dynamics gelling perfectly. Alongside it, the Mégane’s engine is effective rather than enjoyable and as a result the whole car seems muted. As Rog put it: ‘The chassis is absolutely nailed, but the engine lacks sparkle.’ It’s a great diesel, and as a package the Mégane has really surprised us, but it’s missing the zest and zeal that separates the great from the merely very good. It’s close, but the Focus takes the win.