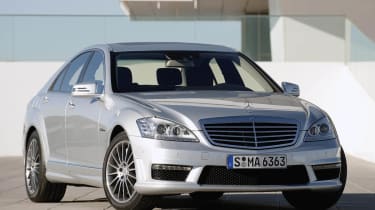 AMG will tomorrow usher in a new era of high-power, high-torque and fuel-efficient turbo-charged V8s when it debuts is new S63 AMG at the Geneva motor show tomorrow.

With up to 576bhp and 664lb ft of torque, the all-new twin-turbo engine will not only be AMG’s third engine philosophy in as many generations, but it will also be 25 per cent more fuel-efficient than the 6.2-litre, naturally aspirated engine it replaces.

Based around an all-new, 5461cc engine block, the oversquare, direct-injection engine will come in two specifications when the production version debuts around October this year. The basic version will be a 536bhp, 590lb ft powerplant, the PP+ (as AMG is calling it at the moment) will have 563bhp and 664lb ft.

Yet for all its power, it weighs 204kg fully dressed, takes no longer to build than the current V8 and uses start-stop technology to help it clock up 27mpg on the European combined fuel economy cycle, along with a 246g/km CO2 figure.

AMG claims the car is no faster than its predecessor, because it doesn’t need to be. It has been designed to fill in the low-rev torque hole the 6.2-litre (fitted to the C-, E-, S- and SL-Class models) had at low rpm, with the base engine’s 590lb ft arriving at just 2000rpm and staying there until 4500rpm, while the faster version’s torque output follows roughly the same curve, arriving at its higher peak at 2500 and holding it to 3750rpm.

While it has different mounting points, the engine, code-named M157, still fits inside the current S-, SL- and ML-Class bodies, though AMG has yet to confirm whether it will nestle comfortably in smaller cars. It avoids many of the more modern tweaks, like variable compression turbochargers and, instead, uses one Garrett-Honeywell turbo per bank (running at up to 1.3 Bar of pressure), combined with a clever, in-house air-to-liquid intercooler capable of dropping air inlet temperatures by 90 degrees Celsius. It also runs incredibly high compression, with AMG claiming it runs at 10:1.

While AMG denies the passenger car range will adopt all-wheel drive to cope with the biturbo’s tremendous torque outputs, so the initial versions will remain rear-wheel drive, punching through a new version of the seven-speed, wet-clutch automatic.

‘There’s no cross-flow in the turbos, like some, and they are not variable vane. They are just to our specifications and they work well.’

Developed out of the new M278 4.6-litre V8 from parent company, Mercedes-Benz, it shares the bore centres and bank angle, but little else in terms of hardware. Its block, sump and cylinder head are different, while AMG also welds the exhaust manifold to the turbo-charger housing.

The cars will still be tagged ‘63’ even though its displacement is nowhere near 6.3 litres. The Geneva show car (the red one) may look a little unusual with its stickers and numbers (not to mention the Camel cigarette sponsorship), but it pays homage to one of AMG's first racing cars. The original 300 SEL 6.8 won the Nurburgring 24hrs and the S63 AMG BiTurbo replicates it right down to the positioning of the stickers.  Click here for more news from the Geneva motor show Video of the Mercedes C63 AMG battling the BMW M3