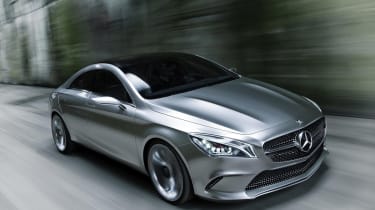 The Concept Style Coupe is Mercedes-Benz's vision of a compact sporting saloon. Based on the same platform as the new A-Class, the CSC draws obvious influence from the CLS.

It follows on from the F800 Style concept released in 2010, and even though the CSC is longer and wider and lower than the current C-Class, the 3-Series rival will sit between the A- and C-Class saloons in the future model line-up. Frameless windows, and the low CLS-like stance single this out as a true sporting model below the full-fat C-Class saloon.

Powered by a 208bhp turbocharged four-cylinder engine, the concept is coupled to the company's 4MATIC all-wheel-drive system via a seven-speed dual-clutch automatic transmission.

On the inside, Mercedes has kept the design of the CSC very similar to that of the A-Class, also featuring the same smartphone integration and COMMAND interface.

The car is to be officially revealed at the the Beijing motor show, along with the updated G-Wagen.