Mercedes-Benz has thoroughly updated the G-Class off-roader, ready for its re-launch at the Beijing motor show. 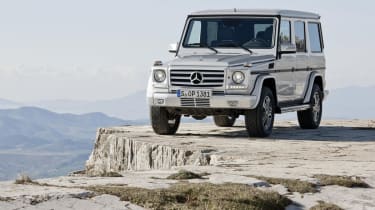 Mercedes-Benz has announced a whole host of upgrades to its most utilitarian model - the G-Class - to bring it thoroughly up to date. The new model is set to be launched at the Beijing motor show.

Since the 'G-Wagen' was first launched in 1979, it has been under constant development, and the 4x4 now boasts one of the most technically-advanced off-road packages on the market - loved the world over for its pure ability in sticky situations.

Two notable additions to the 2012 model line-up are the new high-performance models - the G63 and G65 AMG. Replacing the old G55 AMG, Mercedes-Benz's new G63 is fitted with the 5.5-litre bi-turbo V8, which pushes out an impressive 536bhp, while the even more absurd G65 AMG - which uses the monstrous 603bhp V12 bi-turbo engine, as seen in the recently unveiled SL65 AMG.

Other models at the slightly more sensible end of the spectrum include the 388bhp G500 V8 petrol, and 208bhp G350 BlueTEC diesel. The interior has been entirely replaced, with standard spec for the updated 2012 model including a new all-encompassing internet-enabled 'Command' satellite navigation system.

On the outside, the G-Class has received a few subtle changes, in-keeping with the character of the G-Wagen; LED running lights, updated rear light clusters, new mirrors and some special modifications for the AMG models - including new 20-inch wheels, AMG grille and deeper, more aggressive bumpers.