The AMG version of the new CLS Shooting Brake has been revealed - with a November launch date expected in the UK. 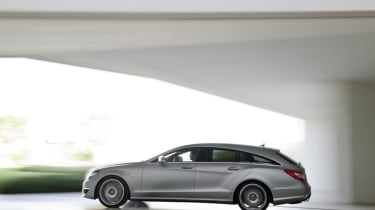 Following shortly after the standard CLS Shooting Brake, Mercedes-Benz has released official details and images of the high-performance CLS 63 AMG Shooting Brake - a disguised prototype of which was recently run at the Goodwood Festival of Speed.

Mercedes' new wagon is powered by the same 5.5-litre twin-turbo V8 as the saloon, which in standard tune produces 518bhp and 516lb ft. This has been tuned to produce 549bhp and 590lb ft in a new limited edition model, which is called 'Edition 1'. The new model is fitted with the AMG performance pack, and produces the same claimed 27.9mpg fuel consumption and 235g/km CO2 figures as the standard car - knocking 0.1secs off the standard 4.4 0-62mph time.

Along with the 5.5-litre engine, other high-performance upgrades fitted to the Shooting Brake include the ‘AMG Ride Control’ suspension set-up, which comprises of three-way adjustable air suspension, and the same widened-track as the Coupe.

The exterior gets a similar treatment to the Coupe, including 19-inch AMG alloy wheels, and lower more aggressive-looking bumpers, as well as the ‘V8 Biturbo’ badges.

With a launch date of November 2012, UK cars should start appearing early next year. Prices are so far unconfirmed, but will most likely come at a slight premium over the £81,180 basic four-door CLS 63 AMG coupe.