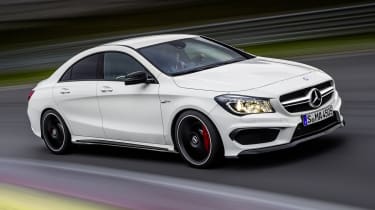 Mercedes-Benz has unveiled its CLA45 AMG performance saloon at the New York motor show. With 355bhp and 332lb ft torque, the CLA45 joins the A45 AMG hatchback in having the most powerful production four-cylinder turbocharged engine in the world.

Its 2-litre unit is handbuilt, utilising twin-scroll turbocharger technology pushing 1.8bar of boost, allowing the CLA45 AMG to hit 62mph in 4.6sec. Power is sent through Merc’s Speedshift seven-speed twin-clutch gearbox. The CLA45 inherits cooling technology from the SLS AMG supercar and SLK55 AMG exhaust tuning.  Even with its 355bhp output, the engine returns a combined 40.9mpg and complies with upcoming EU6 emissions standards with the help of direct fuel injection and stop/start.  A performance-angled AMG 4MATIC all-wheel drive system distributes the CLA45’s power, and feeds off the transmission’s oil circuit, apparently allowing a 25 per cent weight saving over conventional units. There’s a dynamic torque split between the front and rear axle dependent on steering angle, speed, and acceleration. The three-stage ESP system has a Sport Handling mode, which offers a liberal amount of slip angle in other AMGs. The CLA45 uses an AMG-specific 14.5:1 steering ratio, a new rigid four-link rear axle, performance-tuned spring and dampers, beefier anti-roll bars and lightweight 18in alloy wheels. Drilled and vented brake discs are 350mm and 330mm front and rear, respectively. An official kerbweight has not yet been released, but is estimated at around 1530kg.  The Mercedes CLA45 AMG’s debut comes just one day after Audi announced its new S3 Saloon, a high-performance four-door variant of the upcoming A3 Saloon. Mercedes’ offering has 55bhp more than the Audi and gets to 62mph quicker (4.6 versus 4.9sec), though their fuel economy figures are identical. BMW is likely to offer up competition with an M version of its expected 1-Series based saloon.   The Mercedes CLA45 AMG will go on sale in the UK in autumn 2013; prices aren’t yet confirmed but are expected to be around £40,000.